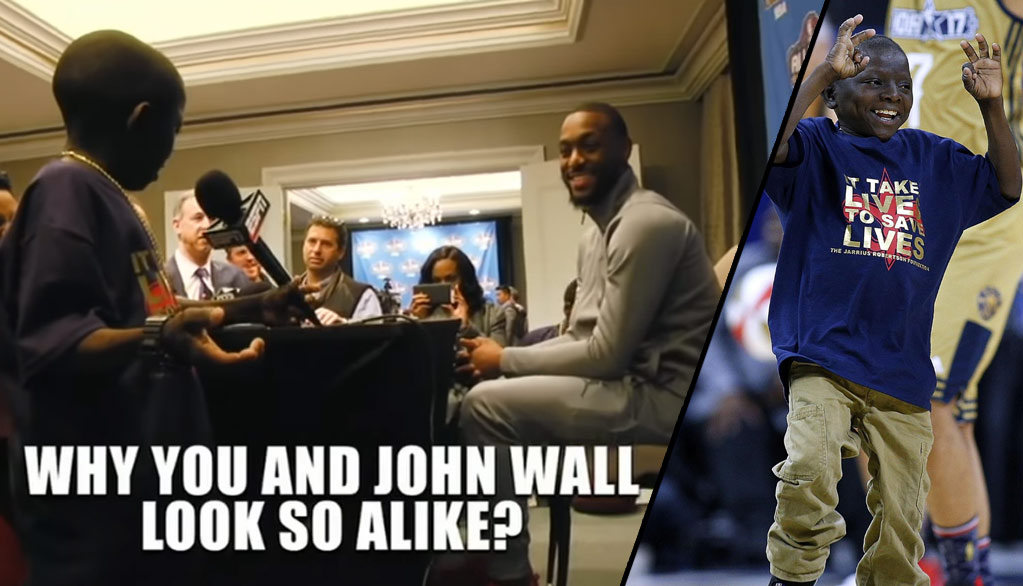 Why do I have a feeling I’ll be making a Day 2 and a Day 3 post of Jarrius?

On Friday, 14-year old Jarrius Robertston – a New Orleans legend known for being a Saints superfan and for his battle with biliary atresia, a chronic liver disease that limits his growth – started his day by stealing the show at media day with the NBA All-Stars and ended with him stealing the show and our hearts at the NBA celeb game.

Here’s his best moments from Day 1

#1: Jarrius filled in for a late arriving Russell Westbrook and yelled at a reporter who said, “I heard you’re kind of a celebrity now?” “Kind of,” Replied Jarrius. “What you mean kind of. I’m up here and you down there.”

#2: When Westbrook did arrive, Jarrius told him KD shouldn’t have left and OKC needs more shooters to make the playoffs.

#3 (1:40 mark of top video): Jarrius telling Kemba Walker he looks like John Wall then walking off while shaking his head.

#4 (2:10 mark of top video): Jarrius finding the real John Wall and then walking off in disgust after Wall names his favorite vegetables.

#5: Fighting Charles Barkley and saying, “you just got tag-teamed son” after he and Shaq tackled Barkley on a couch.

#6: Jarrius easily had the best moment in the NBA Celebrity game when he checked into the game and knocked down his only shot attempt. He didn’t win MVP of the game but he’s been the real MVP of All-Star weekend so far.

#7: His sideline conversations with Draymond Green