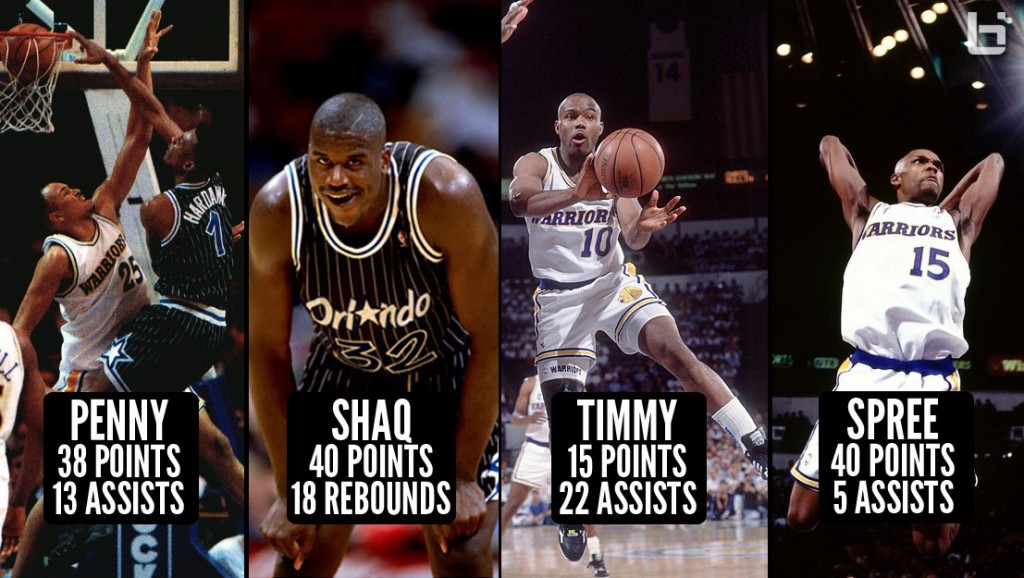 The Golden State Warriors were coming off an eight-game losing streak and the Orlando Magic were off to an NBA best 16-4 record. This should have ...(Read more)

The Golden State Warriors were coming off an eight-game losing streak and the Orlando Magic were off to an NBA best 16-4 record. This should have been a cakewalk for the Magic and their unstoppable duo of Shaq and Penny but it turned into a dogfight — and a dream game for fantasy basketball owners.

The Orlando Magic started the game on fire, shooting 71% in the first quarter but led by just three after the first. The Warriors took over in the second quarter and had a 62-59 lead at the half, behind 22 points from Latrell Sprewell, who had been in a shooting slump. For the Magic, Penny matched Spree with 22 and Shaq had 20 points at the halfway point.

Both teams went back and forth for most of the second half and OT, as Shaq and Spree continued to score at will and the two Hardaways put on a passing clinic. Penny would finish the game with a team-high 13 assists to go with 38 points and Tim Hardaway finished with a career-high 22 assists to go with his 15 points.

Shaq was named Player of the Game with 40 points on 15-of-20 shooting and for causing three Warriors to foul out — Rony Seikaly (the inspiration for Shaq’s trademark dunk) was one away from being number four.