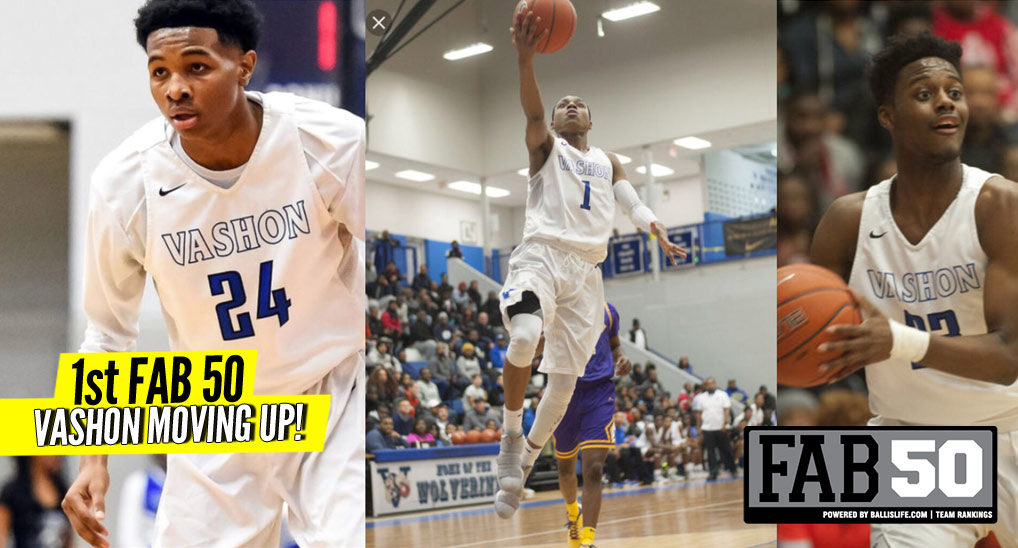 Enough early season results have trickled in to update our preseason national rankings. The first edition of the 2018-19 FAB 50 National Team Rankings powered by Ballislife.com shows four new teams, including two from Georgia. Fast-risers include Sheldon of Sacramento, Vashon of Missouri and independent power Sunrise Christian Academy of Kansas, which cracks the top 10 but unfortunately suffered a huge setback when SMU-bound guard Bryce Cook suffered a stroke on Sunday night.

Although some states have not yet opened up their 2018-19 campaign, there were enough big games and showcases in the past two weeks to update FAB 50 National Team Rankings powered by Ballislife.com for the first time in the regular season.

As hoops has tipped-off sooner around the country to be more aligned with schools’ academic calendars, savvy tournament directors have made Thanksgiving weekend must-see hoops, particularly the Thanksgiving Hoopfest in Dallas and the Holiday Hoopsgiving in Atlanta. The big news from a rankings perspective came at the Thanksgiving Hoopfest, as preseason FAB 50 No. 17 Sunrise Christian Academy (Bel Aire, Kan.) upped its record to 4-0 with a big 71-55 victory over preseason No. 15 Guyer (Denton, Texas), the preseason top-rated team from the Lone Star State. Despite 21 points from Oklahoma-bound De’Vion Harmon, Guyer just didn’t have enough inside to keep up with the talented Buffaloes. Power forward Jalyn Turner, a 6-foot-6 senior, had 12 points, while UCLA-bound Grant Sherfield had 11 points and seven rebounds. Sunrise Christian also got a impactful performance from elite 2020 big man N’Faly Dante, who finished with 11 points and could big the difference-maker in the Buffaloes’ big games this season.

Unfortunately, Sunrise Christian Academy couldn’t celebrate too long as tragedy struck Sunday evening after the team returned to the Wichita area. Bryce Cook, a 5-foot-7 dynamo headed to SMU who provides a big spark off the bench, reportedly suffered a stroke. He was found unresponsive, but was rushed to Wesley Medical Center in Wichita and is now recovering. According to reports, he has use of his extremities but coach Luke Barnwell wasn’t available for further information on Monday.

?? Prayers up for BRYCE COOK!

With its big win, the Buffaloes moved up nine spots into the Top 10 after preseason No. 5 University School (Ft. Lauderdale, Fla.) opened up its season with a 92-82 setback to The Rock (Gainesville, Fla.). University School fell 12 spots in this week’s rankings to a spot right behind Guyer, which only falls one spot from its preseason positioning because Sunrise Christian Academy may be that good. Besides, the talented unit now will be motivated to keep up the positive on-court play as Cook looks to recover off-the-court.

Two Georgia teams fell out of the FAB 50 and two bubble teams from the state move in, including No. 35 Meadowcreek (Norcross, Ga.) as the highest rated of the four newcomers to the first FAB 50 update of the regular season. Meadowcreek opened up its season with a 70-54 victory over No. 50 Wheeler (Marietta, Ga.), which handed preseason No. 11 Norcross (Nocross, Ga.) one of its two losses and also defeated preseason No. 35 Holy Spirit Prep (Atlanta, Ga.) in overtime at the UA Hard In The Paint Classic. Norcross’ 79-69 loss to Southwest DeKalb (Decatur, Ga.) is the one that knocked the Blue Devils from the FAB 50.

At the Holiday Hoopsgiving, Meadowcreek fell to No. 10 Wasatch Academy (Mt. Pleasant, Utah), 75-67, as guard Tre Wlliams scored 22 points for the talented independent club that is eyeing a berth in GEICO Nationals at the end of the season. Wheeler defeated Greater Atlanta Christian at the Holiday Hoopsgiving, 76-66, behind 20 points apiece from Charles Smith IV and Roscoe Eastmond.

Wasatch Academy and Sunrise Christian Academy will tangle on February 9 at the Heartland Hoops Classic in Nebraska, but in rankings terms, that is eons away and there will be plenty of results to digest between now and then as both teams play tough schedules.

Our next FAB 50 rankings update will be December 10 after some terrific showcase games the weekend of December 7-8.