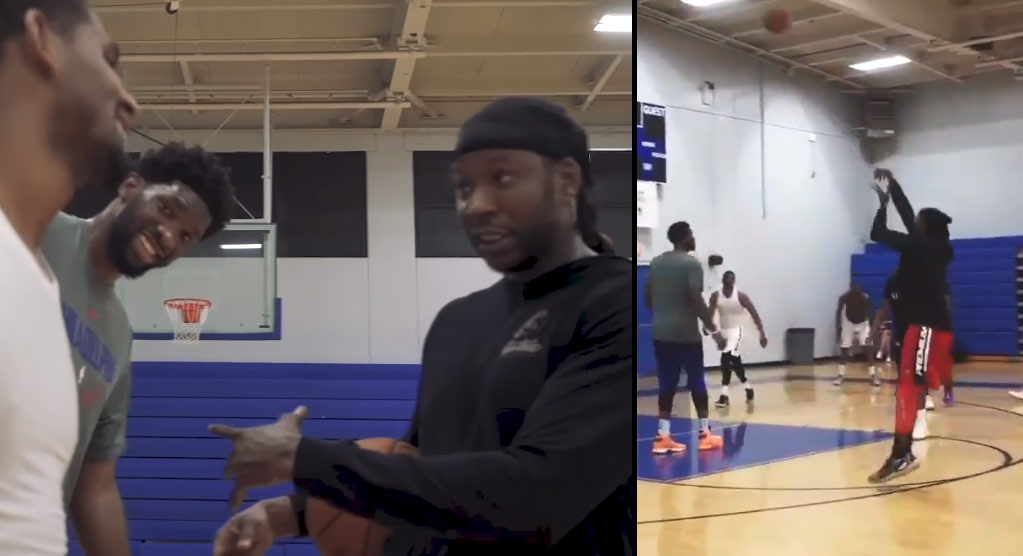 Tityboi highlights from my pure sweat fam ???? thank you @drewhanlen

In the latest episode of the (I wish it was longer and belongs on TV) episode of ‘Unseen Hours’ by Drew Hanlen and the Pure Sweat training crew, 40-year-old rapper 2 Chainz showed Joel Embiid, Jayson Tatum and a bunch of NBA players he still has some game.

Did 2 Chainz really have game in the first place?

He did. Enough game to play Division 1 ball back in the 90s. Here’s a snippet from an ESPN article by Dan Friedell about his playing days.

2 Chainz was Tauheed Epps, basketball player. As a 10th-grader, Epps was the star sixth man for North Clayton High in College Park, Ga., which ran the table for the Class AA state title after a 10-10 start in 1992-93. By his senior year, the 6-foot-5 Epps was a legitimate Division 1 recruit who got some attention from the University of Memphis, which was then looking for a silky, tall guard to replace Penny Hardaway.

After graduating from North Clayton, Epps would go on to play a full season of Division I ball at Alabama State in 1996-97, seeing time in 24 of 29 games, including losses to Georgetown, Ohio State and a Final Four-bound Minnesota. Averaging just less than 11 minutes per game, Epps’ best stat line came in the season finale against Alcorn State, when he put up 14 points and seven rebounds in just 10 minutes. Then, the rap game came calling.

I’m assuming a lot of the young guys in this open run were unaware of 2 Chainz’ basketball resume, especially since guys like Jayson Tatum and Mo Bamba weren’t even alive in 1996. Future NBA lottery pick (#1?) RJ Barrett wasn’t born until 2000, which is when Chainz was known as Tity Boi in a group called Playaz Circle.

And here’s a couple videos of 2 Chainz playing basketball, including some rare high school footage from 1995, him playing on a $450,000 basketball court and having a 3-point shoot out with Hawks legend Dominique Wilkins, who is not known for his outside shot.