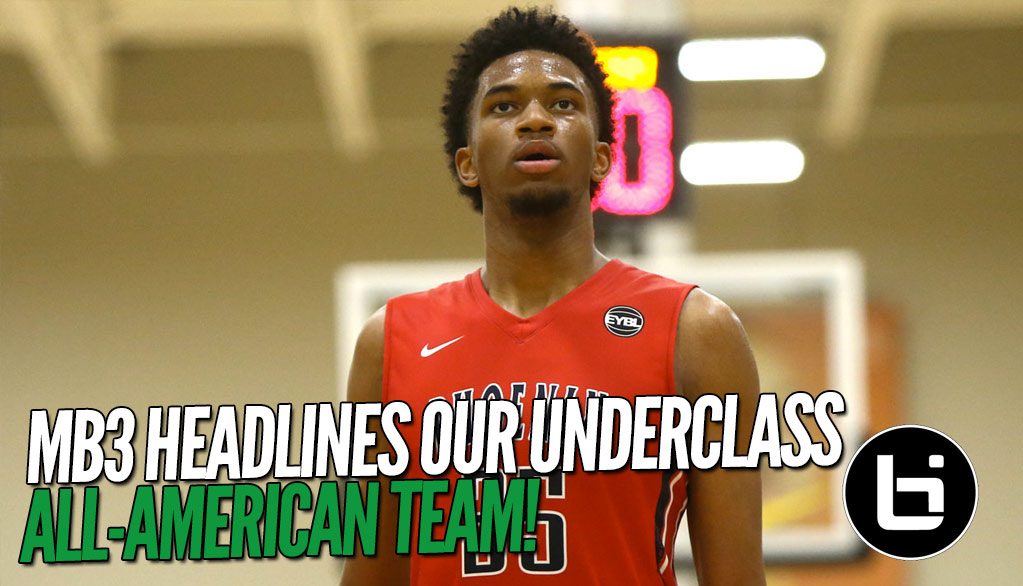 Seven juniors and one special sophomore named to the 23rd Annual All-American Elite Team headline a group of 70 elite players selected to the 2016-17 Underclass All-American team powered by ballislife.com.

National Sophomore of the Year R.J. Barrett of Montverde Academy (Montverde, Fla.) was a fourth five selection on the first team. The only sophomore to earn first five honors in the last 23 years under the current selection format is NBA superstar LeBron James while at St. Vincent-St. Mary (Akron, Ohio) in 2000-01.

The eight All-Americans and 62 other underclass honorees all had standout campaigns for their respective high school teams, while others are sure to emerge this summer as bona fide 2017-18 All-America candidates. Nearly every summer on the grassroots circuit, well-known players are eclipsed by lesser-known commodities, and every so often a prospect comes out of nowhere to emerge as a Mr. Basketball USA candidate as was the case in 2016-17 with first five All-American selection and Ballislife All-American Game MVP Collin Sexton of Pebblebrook (Mableton, Ga.).

It’s a yearly ritual for some underclass All-Americans to change programs. Freshman Kyree Walker of Moreau Catholic (Hayward, Calif.) is headed to Hillcrest Academy (Phoenix, Ariz.). That’s the program where Arizona-bound DeAndre Ayton played at the past two seasons after spending his sophomore year at Balboa School (San Diego, Calif.). More players each year are also re-classifying up in order to speed up the recruiting process or join a class that will be more advantageous to their development. Walker is expected to join the 2019 class while sophomore point guard Tyger Campbell of FAB 50 No. 2 La Lumiere (La Porte, Ind.) is expected to re-classify to the 2018 class.

Expect more player movement and some reclassification as the summer rolls on.

This performance-based squad is selected by National Grassroots Editor Ronnie Flores with input from Mr. Basketball USA panelists. It is chosen after the conclusion of the season, which makes the Underclass All-American Team more reflective of players who made state championship runs.

Our national coach of the year is Freddy Johnson of Greensboro Day (Greensboro, N.C.).

2017 National Junior of the Year: Marvin Bagley III
Nipped Zion Williamson for this honor mainly because of similar production against much better overall competition. In fact, no team recorded as many quality regular-season wins as Sierra Canyon did, and Bagley was a big reason, averaging 24.6 ppg, 10.1 rpg while shooting 66 percent from the field. He might be the most talented all-around frontcourt player to play in California since 1984 Mr. Basketball USA John Williams of L.A. Crenshaw. Prior to Bagley, the last player from a California program to earn top honors among juniors was Tyson Chandler of Dominguez (Compton, Calif.) when the Dons were named FAB 50 national champions at the end of the 1999-2000 season.

2017 National Sophomore of the Year: R.J. Barrett
Last year’s top player among freshman, Charles Bassey, had a tumultuous season in terms to his team’s eligibility status and by missing the TCAL playoffs because of injury. That opened up the door wider for Barrett, and he was so impressive this season the issues Bassey dealt with may not have mattered anyway. For a team vying for the mythical national championship every season, it’s quite impressive to see a tenth-grader dominate games in the fashion this smooth and talented guard did. In addition to being Montverde’s leading scorer the past two seasons, Barrett averaged 18.4 ppg and 4.6 rebounds for Team Canada’s 17U club last summer. He’s the first sophomore selection from a Florida program dating back to the 1974-75 season, as 2015 Mr. Basketball USA Ben Simmons of Montverde Academy did not join the Eagles until late in the 2012-13 season.

2017 National Freshman of the Year: Jalen Suggs
There wasn’t a dominant or potential generational big man entering high school basketball like there was the past two seasons with Charles Bassey (2016) or Marvin Bagley (2015), so this pick was a bit more difficult. It came down to a stellar group of guards and wings that handle the ball and score a ton. At the end of the day, we decided to go with Suggs for his production on a winning team and his mature disposition. A smooth and tight ball-handler who makes the game look easy at times, Suggs led Minnehaha Academy to the state Class AA title by averaging 21.5 points a game while handling point guard duties. Also a great prospect at quarterback on the gridiron, Suggs is already one of the most watched players on the 17U travel ball circuit and could develop into one of Minnesota’s best players in a generation. He’s is the first ever ninth-grade honoree from the state dating back to the 1976-1977 season.

Note: Grassroots Hoops selections 2013-2015; ESPN selections 2010-2012; EA SPORTS selections 2003-2009; Student Sports selections prior to 2003; Selections are based on high school accomplishment, not future college/pro potential, and are reflective of those that lead their teams to state championships. The editors of Ballislife.com do not knowingly select fifth-year players, and those ineligible due to age or academics, Mr. Basketball USA or to its various All-American teams.

Ronnie Flores is the Publisher and Editor of GrassrootsHoops.net. He can be reached at ronlocc1977@yahoo.com. Don’t forget to follow him on Twitter: @RonMFlores