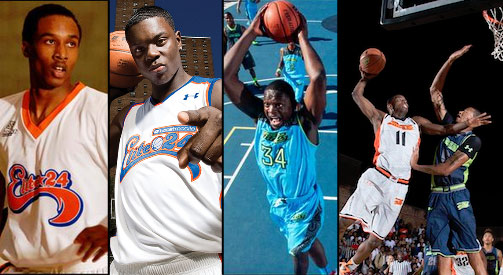 With the Under Armour Elite 24 about to embark on its tenth anniversary, we took a stroll down memory lane to reveal the event’s 24 most ...(Read more)

With the Under Armour Elite 24 about to embark on its tenth anniversary, we took a stroll down memory lane to reveal the event’s 24 most electrifying performers. What these 24 participants accomplished is what the Elite 24 is all about — performing in an outdoor environment that celebrates the essence of the game, earning a reputation, and entertaining the crowd.

1. Brandon Jennings
The Skinny: After turning in an MVP performance in the first Elite 24 (12 points, 15 assists), Jennings out did himself with a 23-assist performance in the 2007 game. His style and flair is exactly what the Elite 24 is all about and his performances have yet to be replicated.

2. Lance Stephenson
The Skinny: One of only four players to participate in three games, Stephenson knew what the crowd came to see: battles and buckets. “Born Ready” made 17-of-22 shots, including 4-of-5 3-pointers in the 2007 game to set the high water mark with 38-points. He was also the top scorer in the 2008 game with 29 points and averaged 27.3 points over three games.

3. Julius Randle
The Skinny: Put his stamp on the 2012 game and proved he was one of the very best players in the country with an MVP performance in Ray Lew’s victory. Randle made 13-of-14 shots and finished with 27 points as to say, “any questions?”

4. Isaiah Whitehead
The Skinny: The Brooklyn native engaged in a memorable battle with Emmanuel Mudiay to the delight of the pro-New York crowd. Whitehead scored on a variety of drives to the basket and long-range shots to finish with 26 points. Most importantly, Whitehead’s team got the win.

5. Aquille Carr
The Skinny: Similar to Brandon Jennings and Lance Stephenson, the UA Elite 24 was tailor-made for a guard with a playground game like Carr. An eligibility issue back home in Baltimore nearly cost “The Crime Stopper” a chance to play in the 2011 game, but in the 11th hour he was cleared and stole the show. Carr stat-line read 21 points, 7 rebounds and 10 assists, but the amount of times he brought the crowd to his feet and the number of new fans he gained was countless.

6. Aaron Gordon
The Skinny: The 16-year old senior-to-be wasn’t 100 percent and was thinking about not playing. If he hadn’t, it probably would have made the game more even because with Julius Randle on his team was just too much for the Marques Johnson squad. Gordon finished with 25 points and 7 rebounds in a dominant performance.

7. Kyle Wiltjer
The Skinny: He was one of the last players chosen for the 2010 game — and didn’t disappoint. With his sweet stroke and smooth turnaround, Wiltjer quickly became a fan favorite, making both of his 3-point attempts and finishing with 20 points for the winning Raymond Lewis club. “Man, Kyle can go!,” said Elite 24 founder Kris Stone.

8. Emmanuel Mudiay
The Skinny: His team trailed Whitehead’s in the 2013 game big at halftime, but Mudiay went to work in the second half to bring his Bed Stuy team all the way back to nearly win the game. This big guard’s versatile inside-out arsenal was on full display, as he finished with 22 points, 7 rebounds, 5 assists and 3 steals.

9. Tyreke Evans
The Skinny: Shined in the 2007 game with a 26-point performance playing off Brandon Jennings. “Reke Havoc’s” drives to the basket were just too strong for anyone to handle.

10. Chase Jeter
The Skinny: Helped Team Liberty to a comeback with timely buckets and by controlling the boards. When it was all said and done, Jeter set an Elite 24 record with 15 rebounds while adding 17 points.

11. Josh Selby
The Skinny: Having the game moved from Rucker Park to Gauchos Gym because of rain put a damper on the 2009 game — until Selby starting heating up, that is. His dunk over Kendall Marshall is one of the best plays in Elite 24 history and he finished with 18 points and 6 assists.

13. Doron Lamb
The Skinny: Another native New Yorker who shined at Rucker Park, Lamb scored 25 points in the 2008 game and also did his thing when the 2009 game moved to Gauchos Gym in the Bronx. He went for 23 points, 6 rebounds and 5 assists to lead the Skip club to victory.

14. Michael Beasley
The Skinny: This physical specimen was the co-MVP of the winning “Skip” team in the first Elite 24 game. His 26 points and 9 rebounds and powerful finishes around the rim gave fans a preview of what he did in his memorable season at Kansas State.

15. Shabazz Muhammad
The Skinny: Few players in the class of 2012 ever challenged the powerful Muhammad and when Nerlens Noel tried to stop him at the rim, the image quickly went viral on Social Media. Muhammad was named co-MVP for the winning Ray Lew club with 25 points and 9 rebounds.

16. Dominic Cheek
The Skinny: Earned co-MVP honors along with future No. 1 NBA Draft pick John Wall for the winning Skip squad in 2008. Cheek earned the nod here over Wall because he went for 23 points (Wall went for 10).

17. Kyle Anderson
The Skinny: A 6-foot-8 guard with a smooth handle, “Slo-Mo” won the 2011 skills competition competing against smaller, quicker guards. He then went out and had 18 points, 8 assists and zero turnovers in Ray Lew’s 10-point victory.

18. Stanley Johnson
The Skinny: This powerful wing was one of the last players selected to the 2012 game and showed the hometown crowd he belonged with 11 points and 2 steals. One year later, he proved he was one of the nation’s top players with a 25-point, 5-rebound and 2-steal performance.

19. Justin Jackson
The Skinny: This North Carolina recruit didn’t have a lot of fanfare coming in to the 2013 game, but he just did his thing on the court. Jackson only missed one shot (9-of-10) to finish with 19 points to help Team Coney Island pull out the win.

20. Aaron Harrison
The Skinny: Teaming with his twin brother Andrew, led the Raymond Lewis team to a dominant victory in the 2012 game. He was the best guard out there on the Venice Beach Boardwalk that day, finishing with 25 points while making 11-of-14 shots.

21. Josh Jackson
The Skinny: His Coney Island team got the win and Jackson made himself a household name last summer behind his 19-point performance. With graceful moves around the rim, he only missed one shot from the field.

22. Myck Kabongo
The Skinny: With his infectious smile and winning personality, Kabongo won over the hearts of anyone he crossed paths with at the 2010 game at Venice Beach. He had game, too, on the court, finishing with 13 points and a game-high 10 assists for the winning Ray Lew squad.

23. Justise Winslow
The Skinny: His Marques Johnson squad was a bit overmatched in 2012, but he gave a valiant effort to keep his team in it for most of the game. The future NCAA champion finished with 21 points on 10-of 11 shooting.

24. Antonio Blakeney
The Skinny: In the first game played at Brooklyn Bridge Park in 2014, Blakeney was involved in numerous highlight plays and didn’t commit a single turnover. He finished with 22 points on 10-of-14 shooting.