On this date in history, May 11th of 2001, Vince Carter — the most popular player in the league at this time — scored 50 points in a 102-78 win over the Philadelphia 76ers in Game 3 of one of the most exciting Eastern Conference semi-finals in NBA history.

34 of Vinsanity’s 50 points came in the first half, which also included Carter making an NBA record 8-of-9 three-pointers; he finished the game going 9-of-13 from three and 19-of-29 overall.

”Once I hit three or four shots, the rim seemed like it was getting bigger,” Carter said. ”Once the shots were really falling, I started moving with the ball more, getting my feet set and following through. It was hard, to tell the truth. I was tired.”

The offensive explosion was a response to Allen Iverson’s 54-point performance in Game 2; AI had just 23 points on 7-of-22 shooting on this night.

“You could sense there was a helpless feeling with them today,” Teammate Alvin Williams said. “Vince was hitting shots. Everybody else just stepped in to do what they could do. It was just a team effort on our part, and it demoralized them. We expect them to be ready on Sunday, and we’ll need to be ready. But we will be ready.”

Philly would go on to win Game 4 on that Sunday and the series in 7. 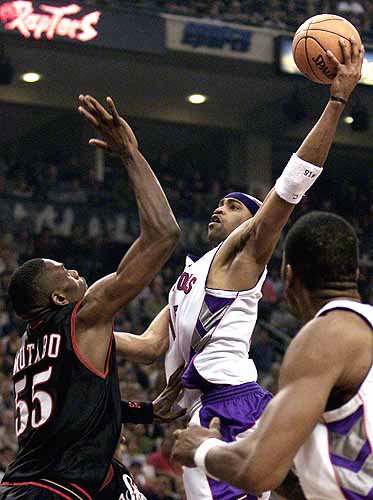