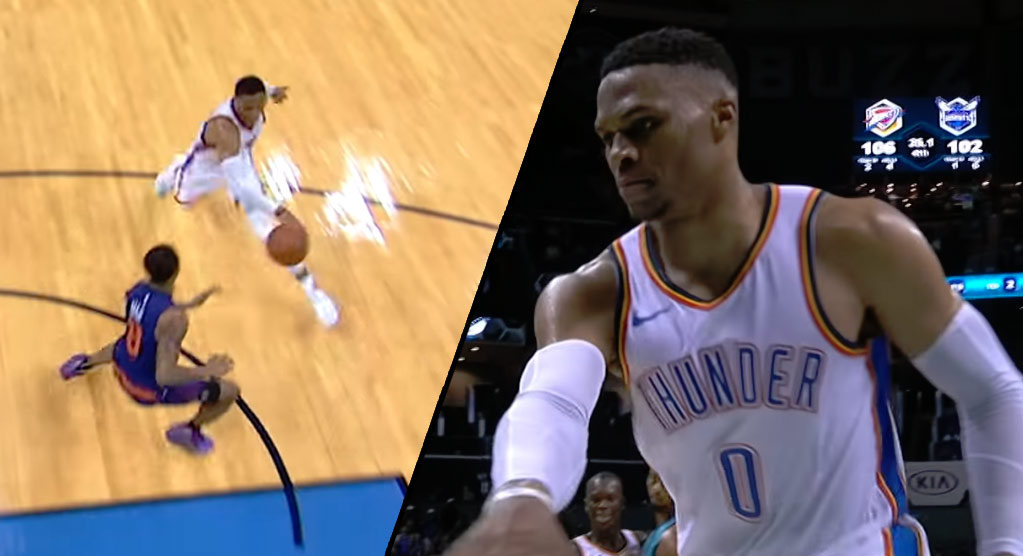 ? Russell Westbrook hit Cody Zeller with the Shammgod then showed the crowd a replay! pic.twitter.com/TLhasosPhb

With 37 seconds left in the Hornets loss to the Thunder on Thursday, Cody Zeller became the latest victim of The Shammgod. On this night, the practitioner of the move named after the God who taught Kobe Bryant how to improve his crossover was Russell Westbrook, who enjoyed doing the move so much, he reenacted it for fans after putting the final nail in the Charlotte coffin.

Due to Russ’ ability and tendency to just blow by and/or bulldoze over an opponent, his resume doesn’t include as many ankle breakers as many other top guards in the league, like Kyrie Irving, Steph Curry, Chris Paul and Zeller’s teammate Kemba Walker. But Westbrook’s handles are nice and he can cross a defender quicker than he crossed KD off his Christmas and birthday lists.

Here are a few of my favorite clips of Westbrook pulling out the Shammgod, starting with an early Christmas present from 2016.

WHEN: 2016
WHO: Tyler Ulis
WHAT: Makes this so cool is how Westbrook does a Spider-Man pose in the air after passing the ball to Steven Adams. The assist was his 22nd of the game, which also included 26 points and 11 boards.

WHEN: 2018
WHO: Brook Lopez
WHAT: Makes this so cool is you probably forgot Brook Lopez played for the Lakers. This play also allows me to bring up Kentavious Caldwell-Pope was serving a 25-day jail sentence when this play happened. He was given a Get Out Of Jail Card for practices and games.

WHEN: 2017
WHO: Dwight Powell
WHAT: Makes this so cool is it ends with a nail-in-the-coffin three-pointer over Harrison Barnes.

WHEN: 2016
WHO: Jrue Holiday
WHAT: Makes this so cool is it’s a revenge play. I know it’s not a Shammgod but people often confuse In and Out dribbles as Shammgods and I love revenge plays.

Back in 2013, Jrue left Russ standing flat-footed with a behind-the-back dribble. I’m going cut Russ some slack because I think he was a little shell-shocked (no pun intended) after almost breaking the backboard with a three-point attempt.