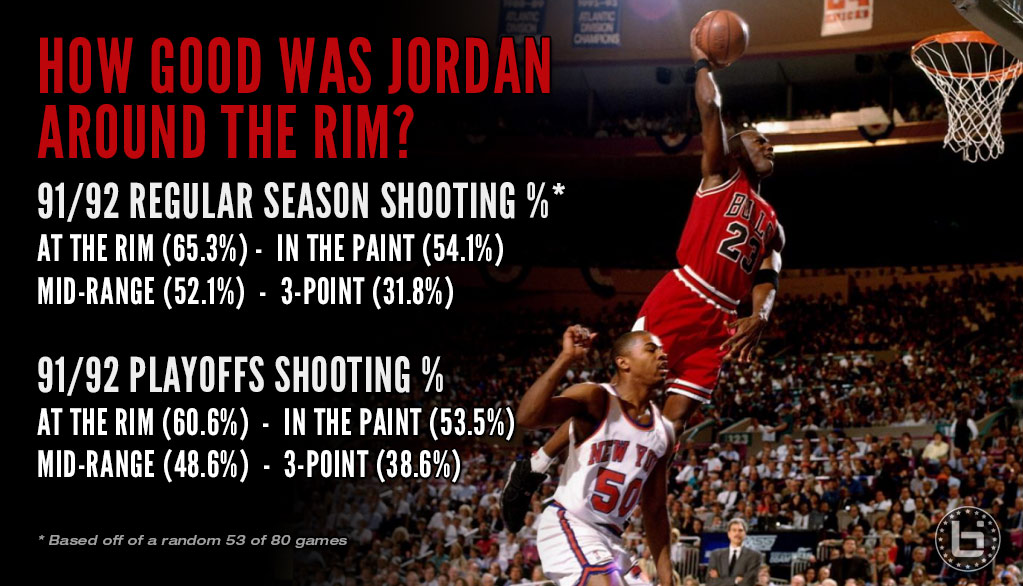 Last week, a video by Coach Nick of BBallBreakdown about Russell Westbrook not being as good of a “finisher” as you think sparked a lot of conversations about the under and overrated finishers. And since these were basketball conversations, Michael Jordan’s name had to come up. And the person who brought up the GOAT also shared a link to a very interesting message board post by ISH user PHILA about Micheal Jordan and his shooting during the 1991-92 season.

Here’s PHILA on why he chose that season and why he’s only breaking down data from 53 of the 80 games Jordan played in that season.

This was an “average” season from Jordan’s prime, certainly not an outlier for him. Actually, depending on who you ask, this might not even be one of his 3 best seasons. Regardless, the reason I chose this year is due to the game footage availability. I couldn’t find more than 25-30 regular season Bulls games from 1985-1991 or 1993. Same goes for any of the 1980’s Lakers, Celtics or Pistons games. I believe 50+ games is certainly an adequate sample size to give some idea of his impact. I also doubt there is any major highlight bias in this data, except in the raw ppg average and 3 point %. His 2 point FG% is actually deflated in this sample, as is the overall team ORtg/DRtg (though this might also underrate the bench). 1991-92 was also the season Jordan called himself a “utility” player.

Here’s the breakdown on that utlitiy player’s shooting percentages.

His playoff numbers took a small dip but his 3-point % went up while making just 4 less 3s in 22 games as he did in 53 regular season games.

The main % we were initially looking at were his % “at rim” and “in paint.”  This is how effective he was in each round of that playoffs.

So how do you like them apples? Besides leading the league in scoring, winning MVP, Finals MVP and a NBA championship this season, he was also a member of the All-Defense 1st team.

If you want to read A LOT MORE about Jordan’s season and numbers then click here.

Michael Jordan – He is still the best player in the NBA. But he has performed a new role this season, filling gaps whenever the club needed a spark, either offensively or defensively. He is still obsessed with winning the scoring title, which is unfortunate, but he is human. In terms of all-around play within a team concept, this has been his best half-season. Grade A+