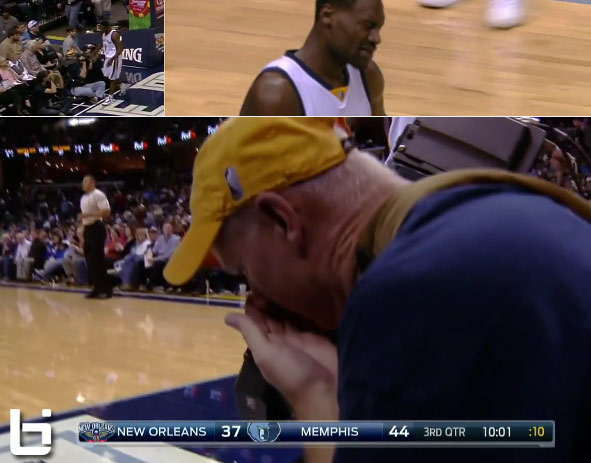 It will be interesting to see if the Grizzlies’ Tony Allen gets fined for this, a bill to fix something on the camera – if anything ...(Read more)

It will be interesting to see if the Grizzlies’ Tony Allen gets fined for this, a bill to fix something on the camera – if anything broke – or just a smack on the wrist for smacking this cameraman’s camera after a foul call.

The cameraman did hold his nose after the hit but thankfully didn’t see this as an opportunity to get paid by acting like he was just shot – like the cameraman Dennis Rodman kicked.  He event took to Twitter to defend Tony and say it wasn’t a big deal.

Making a mtn out of a molehill! TA apologized on the crt & in a DM!! Much bigger things happened at this game! #gogriz #4-0 #defenseWgames

On the positive side for Allen, his team did win and he did have a nice double double with 12 points and 11 rebounds.

This seems like a good opportunity for me to capitalize off of Allen’s smack and show this video “Top 10 Attacks on Cameramans.”