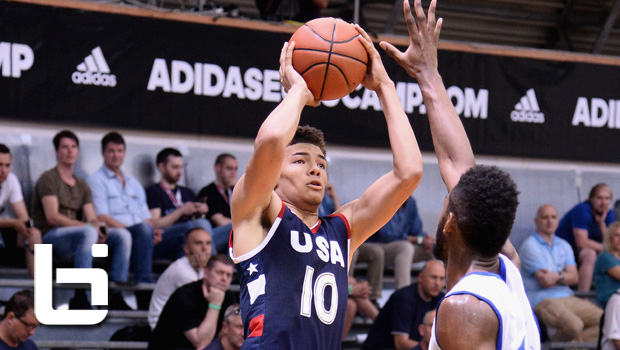 The U.S. Select Team bounced back from its first game and at adidas Eurocamp and played much better versus an assorted all-star team, but still came ...(Read more)

The U.S. Select Team bounced back from its first game and at adidas Eurocamp and played much better versus an assorted all-star team, but still came up short. We give a quick breakdown of what transpired and breakdown every player on the team.

After a morning practice at Saint Antonino Gym away from the event’s headquarters in Treviso, Italy, U.S. Select coach Kerry Keating expected his team to play much better in its second game at adidas Eurocamp. Not surprisingly, the Americans came out fired up against an assembled all-star team and put forth a much better effort, but a lapse at the end of the third period might have cost them the game.

The U.S. Select team played harder from the onset and was in a tight game throughout the first quarter. It got some excellent first half outside shooting from Jordan Usher and his Wheeler (Marietta, Ga.) high school teammate Darius Perry. The score was 48-45 at halftime, but a key sequence at the end of the third quarter doomed the U.S.’ chances for victory.

The Americans had cut their deficit to two points (71-69) but gave up a breakaway layup off a missed free throw and also didn’t handle the shot clock correctly and gave up a 3-pointer at the quarter buzzer to Kenan Sipahi of Turkey (6-6, 1995). Instead of trailing by a possession, the US trailed 76-69. It couldn’t overcome that key sequence, as the all-star team went on a 10-2 run and pulled away to a 96-81 victory.

Usher ended up making 2-of-3 shots from long range and 7-of-9 from the field to finish with 16 points while adding five rebounds. UCLA-bound point guard Jaylen Hands (Balboa School, San Diego, Calif.) used his open court explosiveness to put pressure on the opposition’s defense, finishing drives or getting fouled before the shot attempt. Hands shot 12 free throws, making seven, and finished with a game-high 22 points. As a unit, the US Select team missed 20 free throws (16-of-36).

We breakdown every player on the US Select team below based on two days of practice and games at adidas Eurocamp (listed alphabetically):

Jaylen Hands, Balboa School (San Diego, Calif.) 6-3 PG 2017/1999
Arguably America’s top prospect in the event, the UCLA-bound Hands is an explosive, stop-and-go guard who, despite a small frame, can finish at the rim effectively. He is a good outside shooter, but hasn’t displayed it much here because the guards have been harassing him and turning him as soon as he crosses half court. He has caught the eye of NBA brass, but some are worried about his frame holding up long-term because of the rigors of pro ball.

Jalen Hill, Centennial (Corona, Calif.) 6-9 C 2017/1999
Another UCLA recruit, Hill is one of the youngest prospects nationally in the 2017 class and continues to make slow and steady progress. He has a ways to go to make a big-time Pac-12 impact, but does make his presence felt defensively and makes his defender work because of his activity level. He has to refine his post moves and keep defenders honest by improving his shooting skill package.

Brandon Huffman, Word of God Academy (Raleigh, N.C.) 6-10 C 2017/1998
He has only been playing the game for about five years and it shows against older, more experienced competition. Huffman has to increases his learning curve at it relates to moving inside without the ball, flashing to openings and using screens to get scoring opportunities. When he catches and gathers, Huffman is a load and a high-level finisher, but that isn’t happening often in this setting.

Mayan Kiir, Victory Rock Prep (Orlando, Fla.) 6-9 C 2017/1998
“M.K.” is a native of Australia and is an intriguing long-term prospect. He has raw athletic ability, but is not schooled yet in how to operate offensively in the post. Once he improves his ability to catch and finish with fluidity, he’ll become an attractive high major recruit with his package of length, and aggressiveness.

A.J. Oliver, Daniel (Central, S.C.) 6-4 SG 2017/1999
The Clemson commit can light it up in a hurry (he had 11 points and made three 3-pointers in the first game), but it a bit inconsistent in his jump shooting. Oliver brings energy to the floor and usually makes positive plays even when his shot is not falling.

Darius Perry, Wheeler (Marietta, Ga.) 6-1 PG 2017/1999
Has been impressive in Treviso with his combination of aggressiveness and skill level. He was a bit nervous at the beginning of the first game, but his perimeter defense eventually made a good impact for the U.S. Perry has a solid deep range shot and effectively utilizes a pull-up jumper.

Alex Reese, Pelhalm (Ala.) 6-9 PF 2017/1999
What Reese needs in this setting is a shot of confidence because he has a nice skill package. He’s not particularly explosive, but has nice hands, battles on the offensive glass and knows how to play the game.

Dwayne Rose, Crete-Monee (Crete, Ill.) 6-1 CG 2017/1998
He effort has been excellent and those hustle plays have paid off in games. Rose has to learn how to stop his feet while attacking and sometimes his jumper has a sidespin to it that affects its percentage. Rose also takes what is there and doesn’t force his game or try to do things he isn’t capable of.

Jordan Usher, Wheeler (Marietta, Ga.) 6-5 SF 2017/1998
He’s been in double figures both games for the U.S. and would have had an even bigger game versus the all-star team had he not cramped up in the second half. Usher is an excellent square shooter, excelling both as a catch-and-shoot guy and off the move where he gets into his square up rather quickly. His defensive capabilities will determine at what level he’ll excel in college.

Lindell Wigginton, Oak Hill Academy (Mouth of Wilson, Va.) 6-3 SG 2017/1998
As coach Kerry Keating described, Wiggington is a classic power guard. He uses that frame to effectively get into gaps and his attack off his first step makes him a difficult check. He’s one of the few American players to relish the contact and his big-game experience has helped him in this setting.

Alexis Yetna, Mt. Zion Prep (Baltimore, Md.) 6-7 PF 2017/1997
He comes from France via Africa and is an intriguing prospect. He is rapidly improving and once he becomes more comfortable offensively, his game will take off. He has a nice blend of athleticism and coach Keating has seen glimpses of that vast potential.