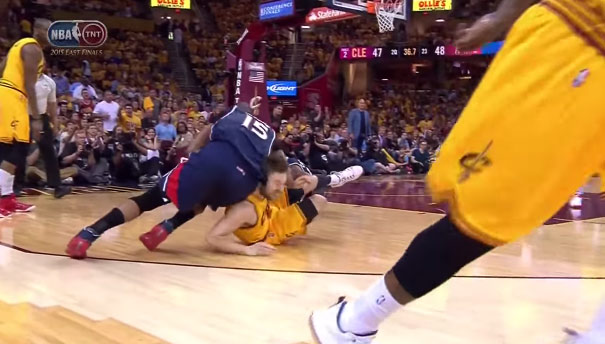 Once again, Matthew Dellavedova found himself in a situation that has people wondering if he’s a dirty player or not. Last night, during a scramble near ...(Read more)

Once again, Matthew Dellavedova found himself in a situation that has people wondering if he’s a dirty player or not. Last night, during a scramble near the end of the first half of Gm3, Dellavedova fell to ground and into Horford. Horford took exception to the contact and dropped an elbow on Delly which earned him a flagrant foul 2.  Dellavedova was given a “live ball physical taunt technical foul.”

“Was it on purpose or not? We don’t know,” Horford said about the play. “Maybe it wasn’t on purpose. But just his track record, I just felt like it was. On my part, it was very poor for doing that.”

“He’s got to learn,” Horford said about Dellavedova who now has 3 controversial plays during the playoffs. “He’s only been in this league for a couple of years or whatever. But he’s got to learn at the end of the day it’s a big brotherhood here. Guys look out for each other. I don’t think it was malicious, but he has to learn.”

After the game, a defensive LeBron talked about the incident.

“Are we going to talk about us trying to win basketball games or about those guys trying to figure out a way that Matthew Dellavedova is this type of … this guy, he works his tail off every single day. He beats the odds, and he comes to play as hard as he can every single night. If they’re focused on Delly, then they’re focused on the wrong thing.

“I’m a little bit off about it because this is my guy, this is my teammate, and this is a guy that goes out and works his tail off every single night, and people are trying to give him a bad rap. He doesn’t deserve it, and I don’t like it.”