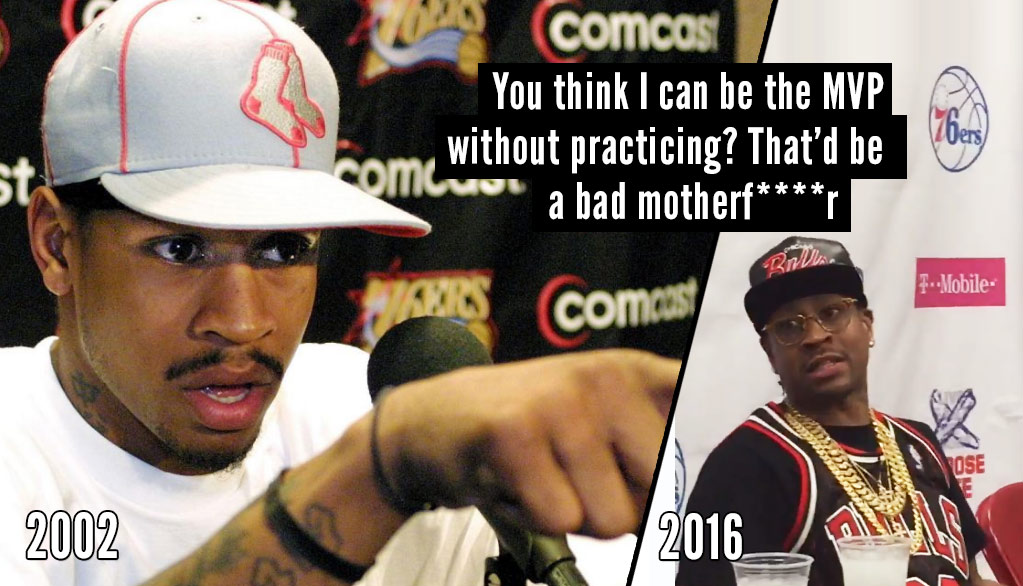 It’s been 14 years since Allen Iverson said the word “practice” 22 times during his infamous rant after the 76ers playoff exit in 2002.  And for ...(Read more)

It’s been 14 years since Allen Iverson said the word “practice” 22 times during his infamous rant after the 76ers playoff exit in 2002.  And for the majority of those years, we all joked about it and just assumed that was just smart-ass Iverson being Iverson. Then in the 2014 documentary “Iverson,” most of us found out that Iverson was upset because the death of his best friend, Rasheen Langford, was on his mind.

“Nobody looks at the whole comment Allen made,” Scoop Jackson says in the film. “He was talking about his boy dying … [The media] would not play that full track.”

In truth, minutes after he jokes about practice, Iverson becomes more serious and vulnerable.

“I’m upset for one reason: ‘Cause I’m in here. I lost. I lost my best friend. I lost him, and I lost this year. Everything is just going downhill for me, as far as just that. You know, as far as my life. And then I’m dealing with this. … My best friend is dead. Dead. And we lost. And this is what I have to go through for the rest of the summer until the season is all over again.”

A year later, in a biography called “Not A Game,” author Kent Babb wrote that Iverson was drunk at the conference and had a shouting match with Coach Larry Brown earlier in the day; Longtime-friend Stephen A. Smith came to Iverson’s defense and said AI was not drunk but just upset because the 76ers were thinking about trading him.

Regardless of why he acted the way he did on that day, we all know now it’s a beaten horse topic that Iverson is sensitive about. But occasionally, you will get a guy like the one in Friday’s press conference for the Allen Iverson Celebrity Summer Classic, who will still ask about practice.  Here’s Iverson’s epic response.

“Obviously you didn’t get it. Obviously you didn’t get it when I explained it, man. I didn’t think I’d ever get that question again. See, you might have not seen the documentary — so I’ll give you that. I’m just gonna hope that you didn’t see it. You just heard me say I was the MVP. That’s the best player in the whole world. You think I can be the MVP without practicing? That’d be a bad mother fucker.”

Click here for more pics and clips of the weekend, which included a “Flashback Friday Block Party” on the block surrounding the Mitchell & Ness store.