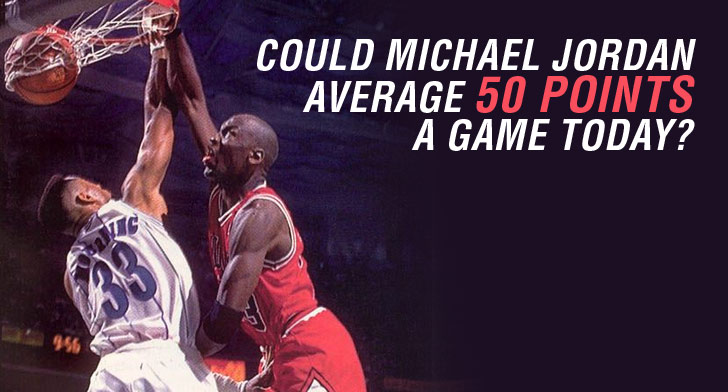 Now here’s a video that will surely upset a lot of people, especially ones that believe Michael Jordan is overrated although they were in diapers when ...(Read more)

Now here’s a video that will surely upset a lot of people, especially ones that believe Michael Jordan is overrated although they were in diapers when a way past his prime MJ dropped 51 (24 in the 1st quarter) on the Hornets, then a year later — a few days before turning 40 — dropped 45 points on the same Hornets.

“You wouldn’t be able to touch him on the perimeter, so he’d be shooting a ton of free throws,” said Zo.

I’m not going to talk about how the league was so rough and tough in the 80s or how the rules have changed today but I will say as long as the league has players averaging 30 points a game, then I wouldn’t bet against a young or prime MJ, on the right team and situation, putting up 50 on a routine basis.

We are talking about a guy who once averaged 37 points a game for an entire season. A season that started off with a 50-point game against the Knicks, followed by 41 the next night. By the end of the first month of the season, he had 5 40+ point games. The last 2 40 point games turned into a 9 game streak of 40+.  After a season-low 11, he bounced back for back to back 41 point games. Later that season, Jordan scored 40+ in 6 out of 7 games and that stretch included a 56 point game. Not impressed enough?  How about in the last week of the season when he scored 164 points in just 3 games.

You are probably saying that’s still not close to 50. You are right but again, we are talking about a guy who once tried his hand at the point guard position for a month and racked up 10 triple-doubles in 11 games. In the game he didn’t record a TD, he finished with 40 points, 11 assists and 7 rebounds.  That 40 point game was one of his 10 40+ games that season which also included 5 50+ games.

So do I think MJ would average 50 today? NO! Do I think he had the ability to do so? YES! Do I miss watching Jordan score 52 points on the Hornets while posterzing Zo? HELL YES!

Alonzo Mourning talks about the price you pay when you block Michael Jordan's shot.https://t.co/0t3EEHNnl2