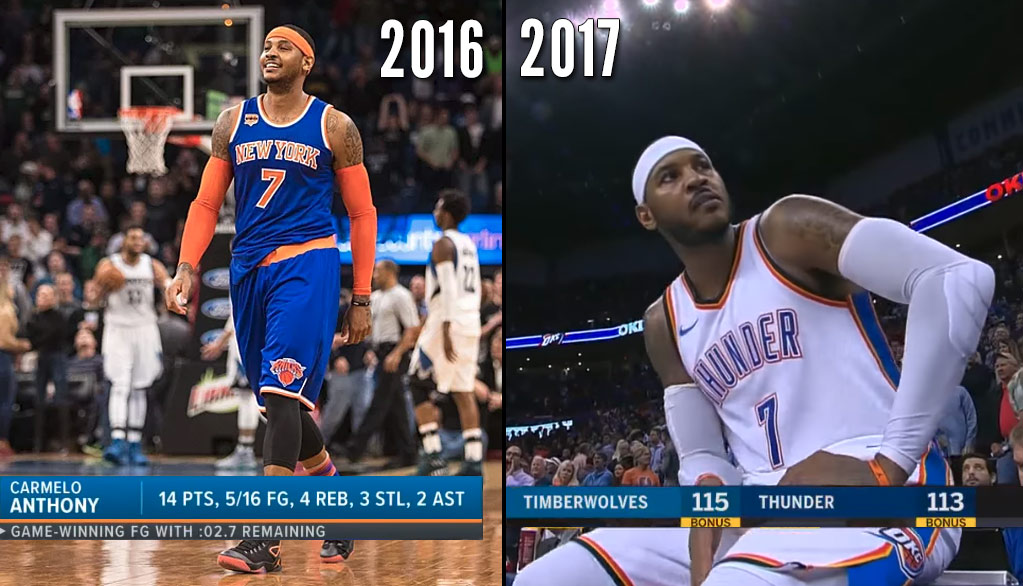 The headline was going to be “Different Uniform, Same Results” if Carmelo Anthony’s three with 4.7 seconds left in regulation turned out to be the game-winner. ...(Read more)

The headline was going to be “Different Uniform, Same Results” if Carmelo Anthony’s three with 4.7 seconds left in regulation turned out to be the game-winner. Thanks to some blind refs and a little help from the Basketball Gods, Andrew Wiggins was allowed to get off and knock down a deep off the backboard three to give the Wolves the two-point victory over the the new-look Thunder. A disgusted looking Melo sat on the scorers table, shaking his head as the Wolves jumped around the court patting Wiggins on his braided head.

For Wiggins and Wolves fans, it was sweet payback for Melo’s game-winning jumper over Wiggins, which was followed with a Jordan shrug and devilish smile, in Minnesota last November.

And for older Wolves fans, it was also payback for the time Mile-High Melo dropped 45 on the Wolves, including a then NBA record 33(!) points in the third quarter of a nine-point victory back in 2008. Randy Foye had a team-high and season-high 26 for the Wolves, who were in the middle of a 13-game losing streak.

This 2012 performance wasn’t as memorable as the ones above but here’s Frank White Melo putting up 19 points in the 4th quarter against the Wolves.