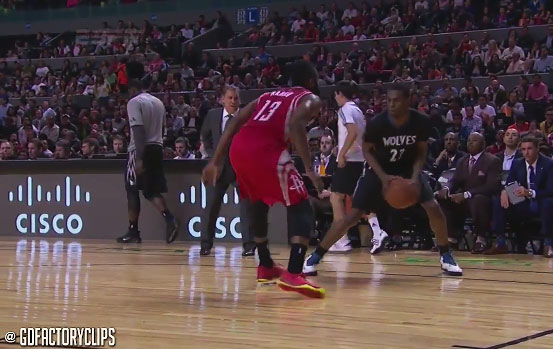 Andrew Wiggins blocks Harden, dunks off a spin move on Harden & hits a 3 in Harden’s face

The #1 pick of the 2014 Draft got an up close look at the #1 pick of 2004 when Andrew Wiggins and the TWolves faced off against Dwight Howard and the hot Rockets in Mexico.

Wiggins made his presence felt early with a block on Harden, a spin move and dunk past Harden, a 3 in the face of Harden…let’s just say Harden had a tough time with Wiggins in the first half. But Wiggins didn’t get to do much else due to  foul trouble in the 2nd half and the duo of Harden and Howard were just too much for the young pups to handle.

Harden finished with 23 points and a game-high 10 assists while Dwight dominated with 22 points, 10 rebound and 4 blocks including a monster one on Wiggins.

Wiggins finished with 15 points, 1 rebound, 0 assists, 1 block, 0 steals, 4 turnovers and 4 fouls in 32 minutes.  His rookie teammate and former Ballislife All-American Zach LaVine got the start and had career-highs of 8 points and 9 assists in 34 minutes.

As for the #1 pick of the 2013 draft, Anthony Bennett, he played just 9 minutes and finished with 2 points and 4 rebounds…but atleast he can “see” now! 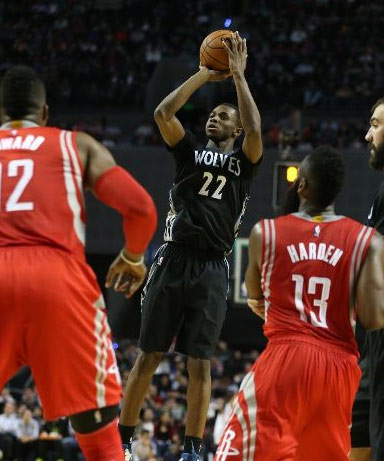