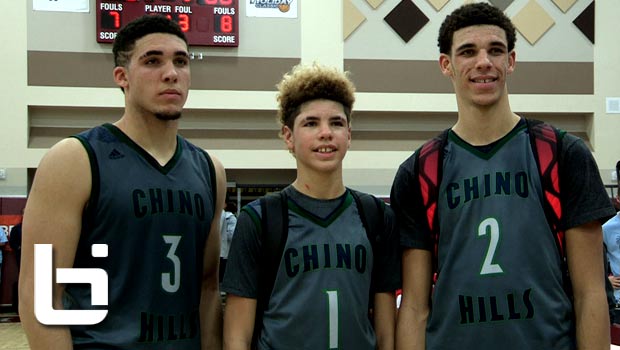 The boys basketball team at Chino Hills (Chino Hills, Calif.) is rolling along unbeaten and has ascended to the No. 1 sport in the FAB 50 national rankings. The Huskies, behind their unique and exciting offense spearheaded by 6-foot-6 UCLA-bound point guard Lonzo Ball, won three holiday tournaments and have scored over 100 points 10 times while compiling a 19-0 record. The Huskies are eyeing CIF Southern Section and CIF State Open titles with an excellent chance to be crowned the No. 1 team in the nation. Standing in their way is FAB 50 No. 7 Bishop Montgomery (Torrance, Calif.) which is the defending CIFSS Open Division champions and currently 19-0.

CLICK HERE to watch a replay of the complete Chino Hills vs. Bishop Montgomery game!

CLICK HERE to watch a replay of the complete Fairfax vs. Windward game!

The host school, Fairfax (Los Angeles) will take on talented Windward (Los Angeles) in a 5 pm (PT) game before the FAB 50 showdown at 7 pm (PT). Fairfax, currently 18-3 and ranked No. 11 in the state by CalHiSports.com, is led by LMU-bound guard Donald Gipson and Army-bound forward Babacar Thiombane. Windward is an underclass-dominated team that includes Shareef O’Neal, a sophomore and the son of retired NBA star Shaquille O’Neal, and another talented tenth-grader in Jules Bernard.

What To Watch For vs. Bishop Montgomery: The Huskies opened up the season ranked No. 11 in the FAB 50 National Team Rankings and have played above expectation level, winning three December tournaments and defeating teams from eight different states to elevate to No. 1. The catalyst is Lonzo Ball, who has elevated his play from the best returning player in the CIF into one of the nation’s top three national player of the year candidates. Lonzo has had multiple triple-double games, including some incredible numbers in Chino Hills’ biggest games. Ball, a once-in-a-decade type passer, had 20 points, 11 assists and eight rebounds in Chino Hills’ 66-60 win over Patrick School of New Jersey in the City of Palms Classic championship game. The big win for the Huskies came in the quarterfinals over three-time defending FAB 50 champ Montverde Academy of Florida that opened up the country’s eyes to potentially how special this team could be. Ball finished that game with 29 points, eight assists and six rebounds. Chino Hills then went to the MaxPreps Holiday Classic and outclassed the field, winning the title game 96-80 over Redondo Union (Redondo Beach, Calif) as Ball had 33 points, 10 rebounds, 10 assists, seven steals and four blocks. Chino Hills has defeated six teams so far that are or have been ranked in the FAB 50 — including two teams twice. In the second win over Foothills Christian (El Cajon, Calif.), Ball finished with 25 points, 13 rebounds and 10 assists. On national television in a rematch with High Point Christian Academy (High Point, N.C.), Ball may have turned in his most impressive performance with 15 points, 22 assists, 11 rebounds, four steals, and five blocks. For good measure, he went for 32 points, 16 rebounds and 15 assists in a recent 92-65 win over Damien (La Verne, Calif.) in what was supposed to be the toughest league test on the road this season.

It will be a colossal upset if Chino Hills loses in league, but Bishop Montgomery will be its toughest test remaining in the regular season. The Knights are the second ranked team in the state — but more importantly one of California’s most disciplined and well-prepared teams despite an underclass-dominated lineup. When Chino Hills played High Point Christian the first time, the Huskies raced out to a 28-11 lead and that team could never recover. The same thing happened in the first game vs. Foothills Christian, as Chino Hills blitzed that team early and led 40-13 after one quarter. High Point Christian played much better in the second go-around, but ran out of gas in the second half trying to keep up with the Chino Hills offensive onslaught. Foothills Christian played much better in the second game, and actually took the lead with around 10 seconds remaining. Since Bishop Montgomery hasn’t played Chino Hills, one of the keys to the game will be how fast the Knights can get acclimated with the Huskies’ unique style. Bishop Montgomery can’t afford a slow start.

There is no doubt Lonzo Ball is the catalyst for Chino Hills, but the reason the Huskies are much improved over last year is the improvement of the veterans and the additions. Li’Angelo Ball (6-4, 2017) is a relentless scorer who has soft hands and excels at shooting on the wing or converting long passes from his older brother Lonzo. The newcomers are what takes this team to the next level. La’Melo Ball (5-9, 2019) can score, distribute, and is a fearless competitor despite being 14-years old. Scott gives Chino Hills toughness, athleticism and has a knack for mixing it up and getting to loose balls. After senior big man Shane Hopkins went down with injury, freshman Okongwu (6-8, 2019) has done an excellent job controlling the paint. As a first-year player, he’s done a great job of staying home and not getting into the air, staying discipline and for the most part staying out of foul trouble against some serious competition. Bottom line, it’s hard to exploit any weakness because Chino Hills makes up for them by the total numbers of shots it puts up and the extra possessions its style produces.

What To Watch For vs. Chino Hills: Bishop Montgomery has not allowed more than 67 points in any of its wins this season (it won that game over league rival Cathedral 99-67) and Chino Hills has scored under 83 points only once, so something has to give. In the game in which Chino Hills scored under that total, Patrick School did as good a job of any team so far of limiting RUN GMZ (as in Gelo-Melo-Zo) to one shot and slowing down the tempo. That City of Palms Championship game was played without a shot clock and there is a 35-second clock in California, so Bishop Montgomery cannot get behind too much or else it will have to put up shots early in the clock, which has played into Chino Hill’s hands all season long. Under Mitchell, the Knights make defenses work by taking good field goal attempts and play disciplined man-to-man defense. If there is any team that is efficient enough on both sides of the ball to pull off an upset, it’s Mitchell’s team.

Chino Hills wants what Bishop Montgomery has — a coveted CIF Southern Section Open Division title under its belt. The Knights are the defending champs and have three prime-time players back from that team, all of whom are underclassmen. Thompson has a knack for scoring and is improving as a ball-hander and defender. Schakel is a jack-of-all-trades and doesn’t have a glaring weakness. He can shoot, rebound and make plays for teammates. His production and the things he does that don’t show up in the box score will be one of the keys to this game. Singleton is tough and his skill level has blossomed this season. If two of the three aforementioned players have a big game, Bishop Montgomery will be in excellent shape heading into the fourth quarter.

Gianni Hunt (6-1, 2019) has cracked the starting lineup and excels at penetration — and is fearless taking big shots. Other role and bench players such as Jalen Washington (6-0, 2018) have made an impact and depth is one area where Bishop Montgomery has a big advantage. Bishop Montgomery is not a big team, but it rebounds the ball hard, but the Knights can’t forget that Chino Hills likes to leak out for streaking baskets off long passes from Lonzo Ball. If the Knights are not dicisplined in this area of the game they will lose by double digits. Chino Hills barely goes to its bench (Cam Shelton comes off the bench for spot minutes) and it would seem the Huskies would be at a disadvantage in this area. The Huskies, and in particular the Ball Bros., are in excellent basketball shape and other teams simply can’t keep up with them over four quarters. This is where Bishop Montgomery has to use its depth to try to slow RUN GMZ down and out execute Chino Hills at the end. Bishop Montgomery could play good team defense, get good offensive production from its big guns, and makes less mistakes — and Chino Hills can still win. Lonzo Ball’s ability makes Chino Hills that good.

What To Watch For vs. Windward: The Lions are coming off a disappointing 53-47 home loss to Western League rival L.A. Westchester and want to stay on course for the rematch the last game of the regular season on February 12. Fairfax’s young backcourt, which includes Hartwell and freshman Ethan Anderson (6-1, 2019), had a few too many turnovers under pressure vs. Wetchester, so look for the Lions to focus on ball-control versus a team that doesn’t quite defend like Westchester does. If Fairfax takes care of the ball and if Thiombane stays out of foul trouble, it should be in good shape. Thiombane will battle Shareef O’Neal and is the more experienced and intense player right now. Gipson is nicely rounding into shape coming off of ACL surgery and has had multiple 20-point outings in big games this season. Realistically, Fairfax is capable of winning this game even if Gipson doesn’t have a big outing. Kitani wants to make sure his team remains focused as it battles Westchester for the potential top seed in the L.A. City Section Open Division playoffs. As the host team of the Fairfax State Preview Classic, the Lions will not overlook Windward and will be motivated to come out and jump on Windward.

What To Watch For vs. Fairfax: In the preseason, this looked like a big-time game with big-time D1 prospects on the floor. There will be some big-time players, but Windward is a struggling club that just went through a coaching change and will be underdogs coming in. Foster, who played in the NBA after a successful career at UCLA, takes over for Smith, who is moving on to coach in the WNBA. Foster previously coached youth teams in the area and it won’t take him long to get acclimated with Windward’s players. The Wildcats have played a tough schedule, so they’ll be ready for Fairfax’s intensity — executing will be the question. It isn’t just youth versus a tough schedule that led to a sub .500 mark — Windward had some injuries, but the coaching change could lead to a spark. Harris is the main player coming off injury, and his play will be key versus Fairfax’s young backcourt. If he distributes and finds the hot hand, Windward could be in position to pull off the upset. Bernard is a talented southpaw and one of the better sophomores on the West Coast. He’s capable of putting up big numbers and his matchup vs. Gipson should be one of the best of the day. If O’Neal is engaged and works inside, it will increase Windward’s chances of pulling out the win. The son of Shaq, Shareef is a budding talent, he doesn’t get the ball inside at times — and at other times he’s hangs out on the perimeter. It will be very interesting to see what type of affect the coaching change will have on O’Neal’s game. The team will have a clean slate and a win here could propel the Wildcats to a strong regular season finish.