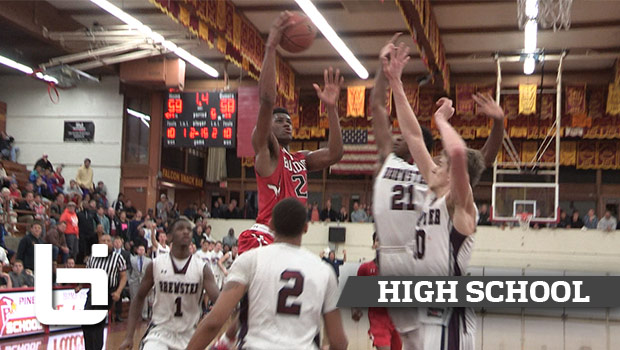 The UA Holiday Classic’s National Division semifinals are set for Tuesday, but it was the UA Division with showcase games, that stole the show on Monday ...(Read more)

The UA Holiday Classic’s National Division semifinals are set for Tuesday, but it was the UA Division with showcase games, that stole the show on Monday night with exciting games and finishes. In the nightcap, Advanced Prep International (Dallas, Texas) defeated Brewster Academy (Wolfeboro, N.H.) on a last-second bucket by junior forward Billy Preston, while South Florida recruit Troy Baxter had dominant showing for Oldsmar Christian (Oldsmar, Fla.) in easy victory over Balboa City School (San Diego, Calif.). Check out the API and Oldsmar highlights!

Advanced Prep International (Dallas, Texas) has had an up and down start to the 2015-16 season after beginning the season in the top 10 of the preseason FAB 50 National Team Rankings powered by Ballislife.com. API came into its Monday night showdown with Brewster Academy with six losses, but highly-regarded junior forward Billy Preston took it into his own hands to get the Bulldogs back on the right track.

After Brewster’s Deleon Brown gave his team a 59-58 lead on a 3-pointer with 7.7 seconds left in overtime, Preston drove the lane and made a contested lay-up high off glass for the game-wining bucket with o.5 seconds remaining in the extra period. His free throw on the conventional 3-point play accounted for the final margin.

Preston led API with 16 points, while junior point guard Trevon Duval (who like Preston is a consensus top 10 2017 prospect) added 15 points. Duval nailed a straight-away 3-pointer with 35 seconds remaining to tie the game at 49-49 as Brewster had a couple of opportunities to win the game in regulation but couldn’t convert close range looks with less than five seconds remaining.

Shooting guard Alpha Diallo led Brewster with 18 points while Tauren Thompson, a fellow 2016 prospect, added 14 points for the the Bobcats.

While API opened up No. 8 in the FAB 50 National Team Rankings powered by Ballislife.com, Oldsmar Christian (Oldsmar, Fla.) opened up at No. 12, one spot behind still unbeaten No. 9 Chino Hills (Calif.), which has advanced to the Maxpreps Holiday Classic semifinals versus Jonesboro (Ga,.), which was also FAB 50-ranked to open the season. At the UA Holiday Classic on Monday, Oldsmar Christian looked every bit like its preseason forecast in a dominant 71-48 victory over Balboa City School (San Diego, Calif.).

Joining Jonesboro and Chino Hills, who some are clamoring for the No. 1 spot in the next national ratings shuffle, in the opposite Maxpreps Holiday Classic semifinal will be Bishop Gorman (Las Vegas, Nev.) vs. Redondo Union (Redondo Beach, Calif.). Redondo routed No. 22 Bentonville (Ark.) in the quarterfinals, 83-57, behind 32 points from unsigned senior shooting guard Leland Green.

In the UA Holiday Classic semifinals, it will be No. 48 Foothills Christian (El Cajon, Calif.) vs. Centennial (Corona, Calif.), with Fairfax (Los Angeles, Calif.) taking on local favorite Army-Navy Academy (Carlsbad, Calif.) in the other semifinal. Foothills Christian already owns a win over Centennial and that early December win helped catapult the Knights into the FAB 50 rankings.