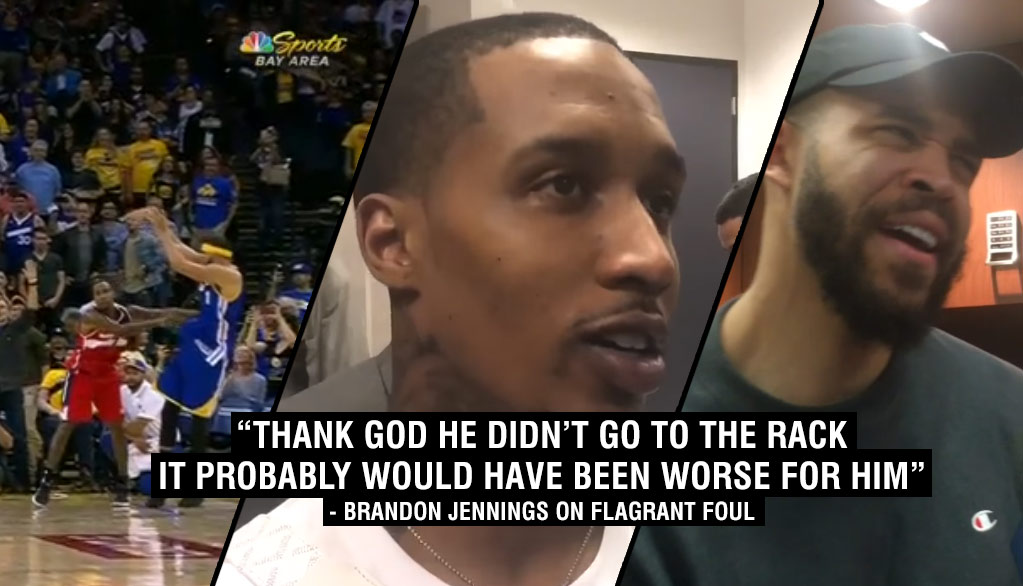 “I’m glad Brandon fouled me,” Said a joking McGee after the 139-115 blowout victory. “I was going to air ball that 3. Shout out to Brandon Jennings.”

Jennings and the rest of the Wizards were far from a joking mood after the loss that saw the Warriors playing Steph Curry and Draymond  Green chasing a triple-double in the final minutes of the game.

“It was very disrespectful,” Jennings said about McGee’s 3-point attempt. “Thank God he didn’t go to the rack, it probably would have been worse for him. But any time like that, I think you should let [the] clock run out. I think it was already disrespectful that they were trying to get Draymond a triple-double, Steph was out there with 40. So, I just felt it was disrespectful.

“I’m old school. Like I said, he better be glad he shot that 3 and didn’t go to the basket.”

John Wall agreed with his teammate.

“Yep, totally agree,” Said Wall, who was just 4 for 11 from the field. “Whenever a team is up like that, supposedly, you just hold the ball and take a shot-clock violation. So, what Brandon did, I don’t think it was dirty. I think it was the right play. You don’t let nobody try to embarrass you and I think that’s what they were trying to do.”

As expected, the always quotable and ready to fight Matt Barnes had an amusing response to Jenning’s comments.

Doesn’t Barnes know Jennings is from Bompton! I’m kidding with the last comment and although I think Jennings is overreacting about the three by McGee, I do think the Wizards have a right to feel disrespected by Draymond shooting a three and picking up a triple-double in the final minute when the Warriors were up by over 20. Steph Curry also made a shot with 1:20 left in the game.