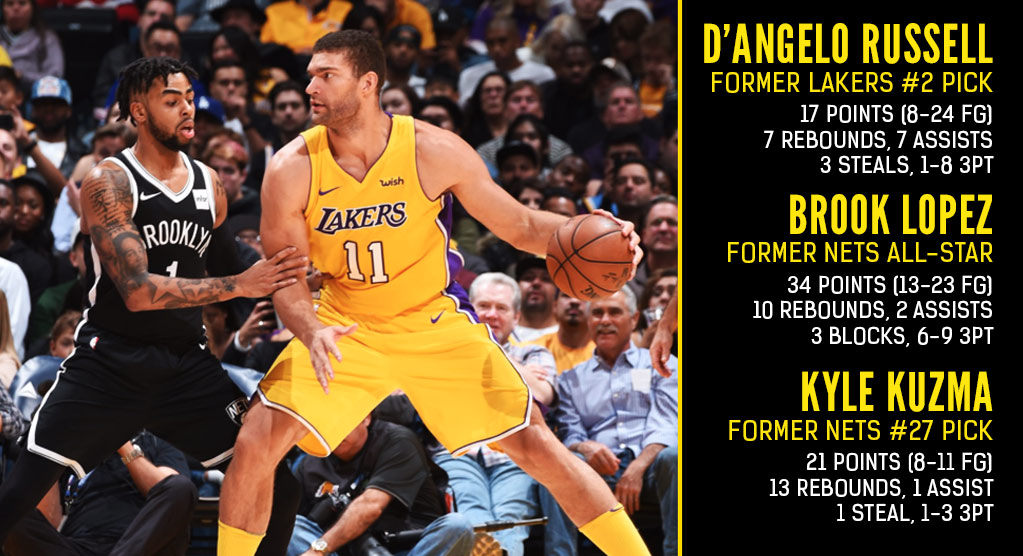 Friday’s game was being hyped as D’Angelo Russell’s revenge game against the Lakers, the team that traded the ice-in-his-veins youngster and Timofey Mozgov’s awful contract to ...(Read more)

Friday’s game was being hyped as D’Angelo Russell’s revenge game against the Lakers, the team that traded the ice-in-his-veins youngster and Timofey Mozgov’s awful contract to the Brooklyn Nets this past summer for Brook Lopez and the Nets’ 27th pick. At the time of the trade, many dumped on it, calling it nothing more than a salary dump. They also assumed the 27th pick would turn out to be nothing to brag about. Some did praise the move, believing Lopez is an All-Star center and a backcourt of D-Lo and Lonzo just wasn’t going to work.

D-Lo has been exceptional for the Nets this season: In 8 games, the former  No. 2 pick is averaging 21, 5 and 5. He’s been playing so well, former teammate Jordan Clarkson was expecting D-Lo to drop 40+ against his old team. He ended up scoring 17 on 8-of-24 shooting for his revenge performance. The best revenge served on a cold dish came from Lopez, who put up 23 points…in the second half. He finished the game with a season-high 34 points to go with 10 boards in a 124-112 victory.

“It honestly wasn’t about (revenge) at all,” Lopez said after the game, when asked if he was trying to get some payback on the Nets. “It was typical. Just another game for me.”

Sure, just another game when a 7-footer knocks down 6-of-9 three pointers, gets a double-double and blocks three shots against a team he spent his first 9 seasons with.

As for that 27th pick the Nets sent to the Lakers, that pick turned out to be rookie surprise/sensation Kyle Kuzma. The fan favorite made his first start of the season and responded with his first career double-double: 21 points (8-11 FG) and 13 boards! As for Mozgov and his awful contract, he scored 5 points and grabbed 4 boards (4 guards on the Nets had as many or more) in 16 minutes.

Last but not least, we have Lonzo Ball. His 7 assists was a team-high but he continued to struggle with his shot, missing 12 of his 15 attempts, all three of his threes and his single free throw attempt.