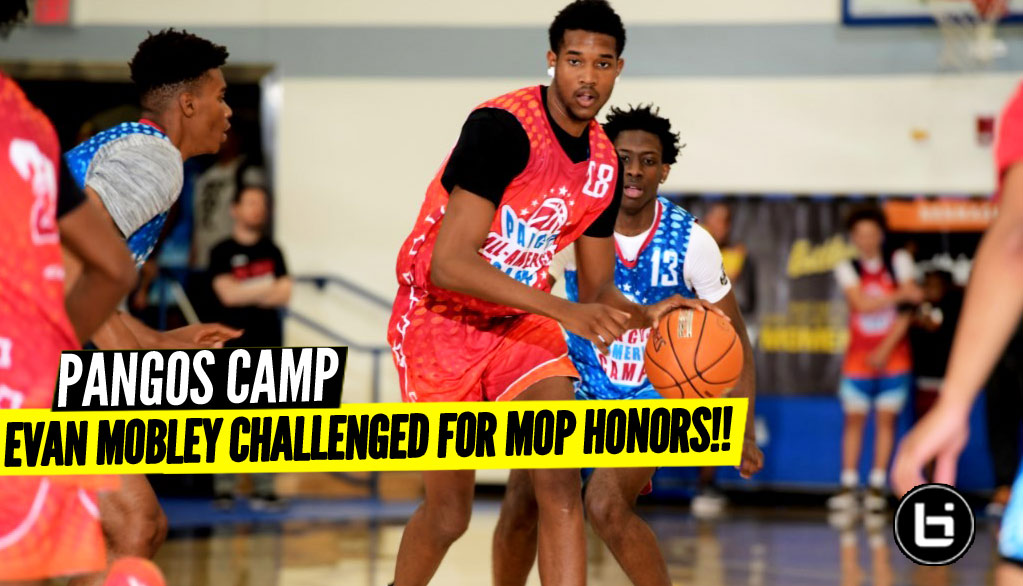 The 2019 Pangos All-American Camp has a bit of everything, from the nation's No. 1 recruit in Evan Mobley down to the most talked-about rising ninth-grader in the country! Read on to see who is challenging Mobley for camp MOPs honors after two days!

The 17th Annual Pangos All-American Camp has a bit of everything, from some of the established national stars of the 2020 class, some fast-rising players in younger classes, terrific lead guards and an abundance of talented big men. We take a quick look at some of the standout performers in each of those four categories led Most Outstanding Player candidates Cade Cunningham of Montverde Academy (Montverde, Fla.) and Evan Mobley of Rancho Christian (Temecula, Calif.).

The Pangos All-American Camp is the top independent (i.e. non shoe-company sponsored) elite camp on the grassroots circuit. The annual event, now in its 17th year under the direction of Dinos Trigonis, has grown from a camp with a regional feel to one with a solid national outreach with a focus on potential “breakout” performers.

This year’s camp has a bit of everything for the basketball aficionados that have descended on Cerritos (Calif.) College, as the nation’s No. 1 prospect is in attendance all the way down to the most hyped incoming high school freshman, and plenty in between. In fact, what’s in between is tons of talented forwards and big men with size. In fact, of the 110 or so players in attendance, a whopping 58 of them are 6-foot-7 or taller.

That timber is led, of course, by the aforementioned No. 1 prospect, 7-foot Evan Mobley of Rancho Christian (Temecula, Calif.). Mobley has done nothing to diminish his standing in the national senior class. When he gets the ball in scoring position, it’s lights out as the agile and gifted power forward finishes with authority or deft touch, whichever is needed for the particular play. He’s also not getting caught up in trying to do too much with the ball, or make plays that don’t play to his strengths. He wastes no time in trying to make the correct read and finish the play. It will be interesting to see which big man he matches up with and looks to challenge him in Sunday’s Cream of the Crop Top 30 All-Star Game.

The player who likely presents the stiffest challenge to Mobley in terms of camp MOP honors is do-it-all point guard Cade Cunningham of FAB 50 national power Montverde Academy (Montverde, Fla.). The Texas native, a 6-foot-7 senior-to-be (2020) simply is a play-maker, whether it is setting up teammates with deft hit-ahead passes, making the correct read in the half court, or finishing himself under control. Cunningham is a matchup nightmare because he’s simply too strong and fundamental for small guards and too quick and secure with the ball for most forwards. Above all, Cunningham’s talent matches his desire to win, and that was never more evident than in a Saturday night camp game when he willed his team to an overtime victory after trailing by seven points (88-81) with just over a minute remaining in the ballgame by virtue of clutch shots and pinpoint passing.

Cunningham was aided in the comeback by 6-foot-6 2020 combo guard Dalen Terry of Hillcrest Prep (Phoenix, Ariz.), who played terrific on-ball defense on 6-foot-8 2021 forward Arthur Kaluma of Universal Academy (Irving, Texas) with the game on the line with 15 seconds remaining. Terry picked up three quarter court, stopped the powerful wing on his drive right and tipped the ball away to prevent a clean shot attempt as the regulation buzzer went off. Terry is one of the better on-ball defenders in camp with instincts from the ball around the rim. He’s averaging 12.3 ppg and 3.7 rpg while consistently looking for the open man on a team that is unbeaten so far.

While some may label Cunningham as a big guard who can make plays, there is no questioning what 6-foot-3 2021 prospect Isa Silva of Jesuit (Carmichael, Calif.) is. He’s as pure of a true point guard as you’ll find in camp, and has all the ingredients a college looks for in a high-major lead guard. For the second consecutive season, the Pangos All-American Camp is NBA certified, meaning scouts from its 30 teams can be in attendance to evaluate, and we’re pretty sure some would say Silva has as good a feel for the game as the guards on their respective roster. Silva simply has an innate feel for where all other nine players are on the court and where his teammates will be a step ahead of where they are. He also has quality size and a solid frame to fight over screens and develop into a good defender and shoots the deep ball well enough to keep elite defenders honest. Simply, put it’s hard to find a hole in his game.

After competing in the NFHS-approved Section 7 June team camp in Phoenix with Jesuit, Silva will participate in the Basketball Without Borders event representing Mexico.

Just as it is hard to find a hole in Silva’s game, it’s hard to find a hole or opening on the court that 5-foot-10 2021 prospect Zion Harmon of Bella Vista Prep (Ariz.) via of Marshall County (Benton, Ky.) can’t exploit. Harmon has a low-to-the-ground handle and combines it with ground-covering ability and complete confidence in his ball-handing ability to create the most dynamic and show-stopping guard in attendance. Other guards at this camp simply can’t stay in front of this well-traveled dynamo, who knows how good he is with the ball and knows when and where to take advantage of his deft ball-handling ability.

Harmon is terrific in pick-in-roll situations, especially with the bounce pass or whip pass through and around defensive traffic, and also has his deep range jump shot working at Pangos. Harmon changes direction under control as well as any guard we’ve seen in recent memory and is fundamental enough that the occasional spectacular or low-risk play a coach has to live with. Harmon is not listed as one of the assist leaders in camp, but trust us when we say he’s thrown more than his fair share of “dimes”, both of the hit ahead and spectacular variety.

According to the statistics provided, 6-foot-8 Scottie Barnes of University School (Ft. Lauderdale, Fla.) leads the camp with 5.7 apg with Silva right behind him at 5.0 apg. Barnes is the second-leading rebounder with 7.0 rpg while leading the pack at 7.3 rpg is 6-foot-10 Mousa Diabate of DME Academy (Daytona Beach, Fla.).

Mohammed of Greenwood Laboratory (Springfield, MO) made his presence felt from the opening tip-off Friday night, using his elite burst in transition and freakish leaping ability to get to the rim and finish through or over contact at-will. The 6-foot-5 wing leads the entire camp in scoring at 28.7 points per game. Mohammed brings a no-nonsense type of approach to the floor, which is quite welcomed in a setting like this, and his impact on the defensive end has led to a number of easy transition opportunities for his squad. He doesn’t try to make the flashy play and instead makes the simple one to put his team in the best position to win games. Six-foot-7 2021 prospect Terrence Clarke of Brewster Academy (Wolfeboro, N.H.) No. 2 at 25.0 ppg and 6-foot-6 2020 Jaylen Clark of Etiwanda (Calif.) next at 23.0 ppg.