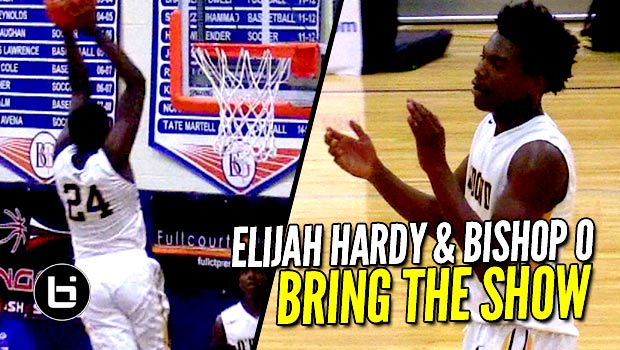 The Platinum Division at the Tarkanian Classic featured eight California clubs in the 16-team bracket and seven of them advanced to Saturday’s championship semifinals. Top seeded ...(Read more)

The Platinum Division at the Tarkanian Classic featured eight California clubs in the 16-team bracket and seven of them advanced to Saturday’s championship semifinals. Top seeded Chino Hills (Calif.) will take on a talented Bishop O’Dowd (Oakland, Calif.) team looking to knock off its second FAB 50 – ranked Golden State power in its first three games. The only game that won’t involve two Golden State teams is No. 2 seed and host Bishop Gorman (Las Vegas) taking on L.A. Westchester.

The Western United States is well-represented at the fifth annual Tarkanian Classic in Las Vegas, but the top (Platinum) Division is represented by only two states in the championship quarterfinals: Nevada and California.

A whopping seven teams from the Golden State won opening-round games, including defending FAB 50 mythical national champion Chino Hills (Calif.). The Huskies, which entered the tournament ranked No. 10 in the latest FAB 50, actually trailed bubble club Clark (Las Vegas) by 10 points with nine minutes remaining in the second half (Nevada plays two 16-minute halves with no shot clock) and by eight points (80-72) with six minutes to go, but UCLA-bound senior Li’Angelo Ball found his grove and made some big shots down the stretch in the 91-87 comeback victory.

Although he didn’t score much, sophomore big man Onyeka Okongwu continues to be a difference-maker in the Huskies’ current 43-game winning streak. He came up with a big blocked shot, which led to a heady pass from La’Melo Ball to his other brother Gelo that ended in a clutch 3-pointer that put Chino Hills (8-0) down 82-81 with 3:34 remaining. With Melo Ball fouling out with 3:34 remaining, Gelo Ball and his teammates were even more focused thereafter. Gelo Ball hit another 3-pointer to give the Huskies a 84-82 lead and Clark (5-1) was slowed by missing two critical front ends of one-and-one free throw situations.

Gelo and Melo Ball combined for 66 points, with Gelo going for 40 points and Melo 26 points. LMU-bound Eli Scott chipped in 15 points for the victors.

Chino Hills will attempt to keep its winning streak alive and advance to Monday’s semifinals at the Orleans Arena by knocking off Bishop O’Dowd (Oakland, Calif.) in a 3:40 pm PT quarterfinal. The Dragons defeated Putnam City West (Oklahoma City, Okla.) 62-57 in their first round game. O’Dowd actually led 34-18 at halftime, but saw its 16-point lead slowly dwindle until Putnam City West eventually tied the game on a 3-pointer by sophomore guard Shelby Simpleton (18 points on six 3-pointers) with 2:58 to remaining. O’Dowd regained its focus down the stretch to set its date with Chino Hills.

Junior Naseem Gaskin led the way for Bishop O’Dowd with 18 points, while senior B.J. Shaw (the son of former NBA player Brian Shaw) added 16 points. The X-Factor for the Dragons is 6-foot-9 sophomore post Raymond Hawkins, a tremendous prospect who is starting to come into his own as a player. Hawkins, who finished with 15 points, can run like a deer, defend the perimeter and finish with authority. He will see his recruitment pick up after this event based on conversations we’ve had with college coaches.

This game was only the second of the season for O’Dowd, which knocked off preseason California No. 1 and current FAB 50 No. 9 Bishop Montgomery (Torrance, Calif.) at the Nor-Cal Tip-Off Classic on November 26. The Dragons’ underclass-oriented team is a bit inconsistent, but has the potential to play with anyone if its guards take care of the ball and make perimeter shots.

“We are just happy to be playing the No. 1 team in the country and not to be blown out by 50,” Bishop O’Dowd coach Lou Richie. “We have to figure this out…they look unbeatable. We have to rebound the ball and get back in transition. If our guards try to outscore the Ball brothers, we lose. If we try to outplay them, we can win. A wise man told me give up the good shot to get the great shot.”

The winner of O’Dowd-Chino Hills will definitely be playing a California team in Monday’s semifinal. It will be Roosevelt (Corona, Calif.) or Crossroads (Santa Monica, Calif.), which are ranked No. 16 and No. 17, respectively, in the Cal-Hi Sports state rankings. Roosevelt advanced with a 66-55 victory over Valor Christian (Highlands Ranch, Calif.), as CAL-bound Jemarl Baker nailed four 3-pointers and scored 24 points. Crossroads defeated Cathedral Catholic (San Diego, Calif.), 42-29, as junior forward Shareef O’Neal had 15 points, eight rebounds and two steals.

Crossroads-Cathedral Catholic was billed as a big-time matchup between O’Neal and probable McDonald’s All-American Brandon McCoy, but the flow of the game never really allowed for it to materialize as fans intended. McCoy scored 15 of Cathedral Catholic’s 29 points and added six rebounds and two blocks in a game one California team had no choice but to lose. In the other six first round matchups, the California team was victorious in each one.

Bishop Gorman (Las Vegas) is the only non-California quarterfinalist, as the Gaels will take on perennial L.A. City power Westchester in their quarterfinal matchup. Gorman breezed past Denver East (Denver, Col.) 76-40 as senior Charles O’Bannon Jr. and junior Jamal Bey each netted 14 points. Westchester clawed its way to a 65-43 victory over Windermere Prep (Windermere, Fla.). Senior forward Luis Rodriguez led the way for the Comets with 18 points.

The other FAB 50 ranked team in the event is No. 18 Mater Dei (Santa Ana, Calif.) and it had no problem getting by Desert Pines (Las Vegas, Nev.). Junior guard Spencer Freedman led the way with 26 points (including 6-of-10 3-pointers) to go along with eight assists and two steals. The Monarchs will take on Salesian (Richmond, Calif.), which downed Bingham (South Jordan, Utah) 36-32 behind some clutch play from junior guard James Akinjo (9 points).