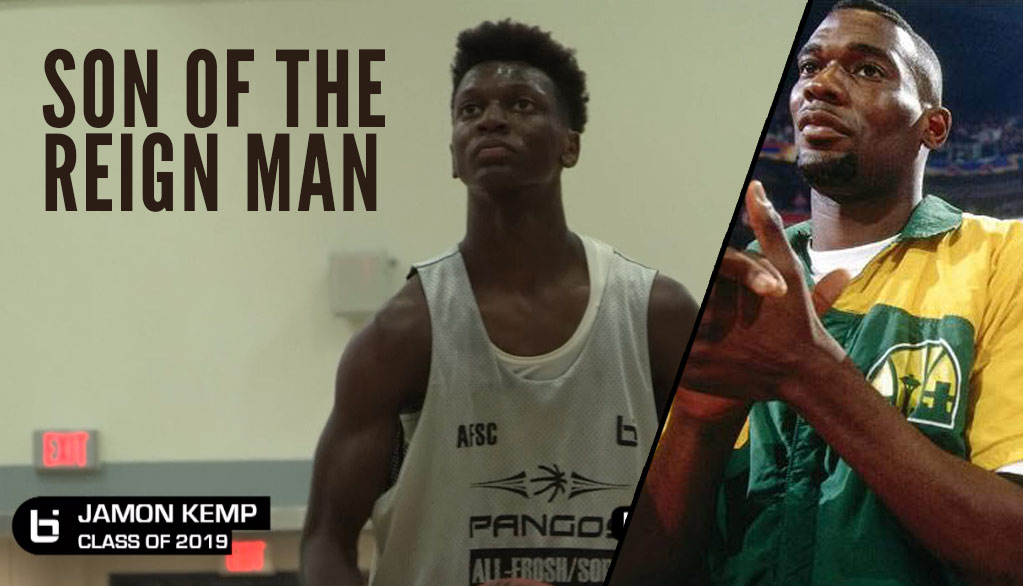 Explosive athlete in transition. Bouncy. Good size and length. Those were a few things said by scouts about 6’5 class of 2019 Seattle baller Jamon Kemp at ...(Read more)

Can Jamon Kemp Follow In His Father’s Footsteps (or Should I Say Leaps) ?

Explosive athlete in transition. Bouncy. Good size and length. Those were a few things said by scouts about 6’5 class of 2019 Seattle baller Jamon Kemp at the Pangos Frosh/Soph camp this past weekend. Those were also a few things said about  his father – Seattle Sonic legend Shawn Kemp, who was also in attendance – when he was attending/dominating high school. The big, very big, difference is, everything said about Shawn was in all caps and followed by multiple exclamation points.

If only YouTube and Ballislife were around when the Man-Child was a man among boys in Indiana during the late 80s. He wasn’t just posterizing kids the way he would one day posterize Alton Lister, Chris Gatling and Dennis Rodman, he was helping his team win sectionals as early as his freshman year. By the time he was a sophomore, he was a bigger celebrity than a few Indiana Pacers; He even beat a certain unnamed Pacer -who was hosting a basketball camp at Kemp’s high school gym – in a game of 1-on-1 to 10 points. He was on top of the world, on the top of every college recruiting list and touching the top of the backboard.

Then came his controversial senior year. His team was an arena-filling travelling circus show made up of fans, curious locals, and sadly,  kids and even adults who would cross the line of good-natured trash-taking and even throw stuff at him. He was teased with chants of S-A-T by fans of the opposing teams, which was combated with chants of N-B-A by Concord high students. He was snubbed of winning Indiana’s Mr. Basketball (anybody remember what Woody Austin did after winning this?) despite being the best high school player in the state, best high school player in the nation and in the class with Moses Malone and Darryl Dawkins as best high school players ever. His final game for his high school team was a loss in a state title game, which Kemp fouled out of.

Then Kemp made his national TV debut at the McDonalds All-American game and didn’t disappoint. He had Dickie V going insane after a coast-to-coast dunk and finished the game with a team-high 18 points.

After a very short and controversial college career, Kemp finally landed in the NBA and the rest is history. I’m not going to spend anytime talking about his exceptional pro career that some do consider disappointing, but I will say I had the opportunity to talk to his Sonic teammate Gary Payton on Sunday and he agreed that Kemp is “easily a top 10 power forward ever.”

Forecast: Cloudy with chance of storms.