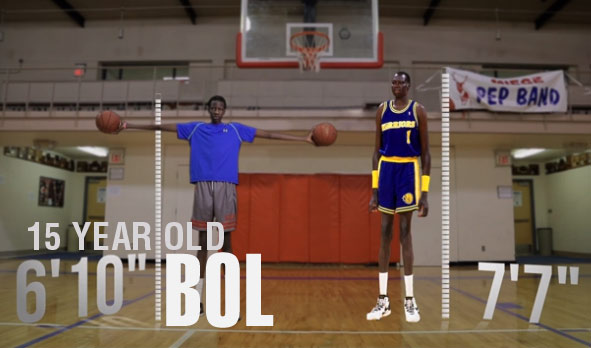 Basketball icon Manute Bol, who passed away in 2010 at the age of 47, was a great humanitarian off the court and a much loved 7’7 ...(Read more)

Basketball icon Manute Bol, who passed away in 2010 at the age of 47, was a great humanitarian off the court and a much loved 7’7 shot-blocking machine who would occasionally show off his 3-point range on the court.

His son, Bol Bol, is a 6’10 15 year old hoop phenom who has the potential to become a taller version of Kevin Durant…..seriously? It’s a stretch (no pun intended) but Bol has the tools to be a great shooter and the genetics to be a 7 footer  closer to his father’s height than most of the 7 footers we currently have in the league.

We recently had the pleasure of contributing some footage to Bleacher Report who put together this great piece on the future star, his family  and his plans to follow in his fathers step on and off the court.