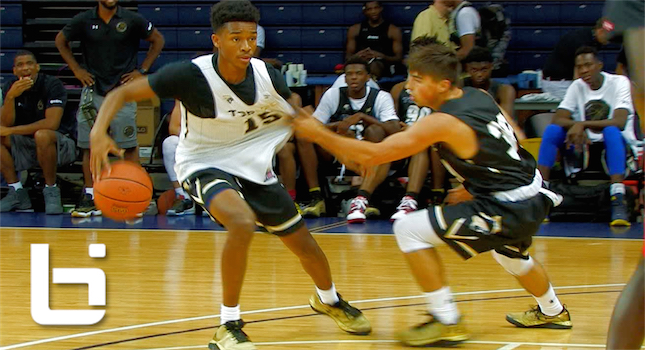 The main theme of the 2016 NBPA Top 100 Camp has been youth, as many of the top performers at the prestigious camp have been 2018 and 2019 prospects. Some of the top standouts after two days include two national class players of the year for 2015-16: Charles Bassey (freshman) and Romeo Langford (sophomores).

The annual NBPA Top 100 Camp kicked off Wednesday at John Paul Jones Arena on the campus of the University of Virginia with a handful of the nation’s top overall prospects regardless of class in attendance competing in NBA-length games using a 24-second clock. The prestigious camp, put on by the NBA Player’s Association and directed by grassroots czar John Lucas traditionally brings together many of the nation’s top senior-to-be’s (in this case 2017). With a crowded grassroots calendar, however, Lucas and his staff assembled an impressive collections of 2018 and 2019 prospects.

Leading the way has been 2015-16 national freshman of the year Charles Bassey of St. Anthony (San Antonio, Texas). The 6-foot-10 2019 phenom stood out at the recent Pangos All-American Camp and is stepping up his game even more. Bassey has the skill level on both sides of the ball to make him the No. 1 prospect in the class and one of the best players in the country, regardless of class, by the end of summer. Bassey is expanding his range to include a solid looking 3-point set shot and displaying good patience in his shot selection. On the glass, he’s simply been phenomenal, clearing the ball and also going out of his area. Considering he’s only been playing since the age of 12, Bassey could develop into one of the best all-around bigs to come down the pike in quite some time if he stays focused.

Another 2019 oozing with potential is 7-foot-1 Chol Marial of Cheshire Academy (Cheshire, Conn.). Marial is even less experienced in a big-time grassroots setting than Bassey, but he’s proven he belongs with solid half hooks and other sweeping offensive moves around the basket. Defensively, he’s an astute shot-blocker with good instinct and the ability to go get shots out of his area. Marial runs the floor well for a young seven footer and has a high ceiling for improvement with regards to overall strength, face ups, and learning how to gain favorable defensive position instead of waiting on the spectacular block.

Marial is the lesser known of the two standout sophomore-to-be big men, having bounced around on the various age group teams (17U-15U) of the Connecticut Basketball Club on the Under Armour Association circuit. Marial had a chance to test his wares against Bassey in a head-to-head showdown on Thursday night and it Bassey who got the better of it.

Bassey dominated offensively and on the boards and led his team to a 82-69 victory. Bassey and Chol were not always on the court at the same time, as playing time is spread around in this camp setting. When they were on the court at the same time, however, Bassey was the more impactful and productive big. He finished with 17 points, on 8-of-13 shooting from the field, including a rhythm 3-pointer, 14 rebounds, three assists and a steal. Marial finished with four points on 2-of-5 field goal attempts, two rebounds, two blocks and one steal.

The statistics are a bit misleading because Bassey played eight more minutes and his teammates did a better job of feeding him the ball in the painted area in comparison to Marial. Bassey is also more fluid running the court and doesn’t necessarily need teammates to set him up because he is excellent on getting the return pass after grabbing the carom. Bassey also is a solid ball-handler, whereas Chol is solely dependent on being set up.

Through four camp games, Bassey is averaging 11.5 points and 10.3 rebounds per game, the latter average topping the camp so far.

Bassey was aided in his team’s victory by a couple of 2017 prospects in Christian Popoola Jr. and Evan Battey. Popoola, a combo guard out of Bishop Gorman (Las Vegas, Nev.), hit 3-of-4 3-pointers and 7-of-9 shots from the field to finish with 21 points. Battey, a powerfully-built forward who is one of the many national sleepers at this camp, added 17 points while making all eight of his free throws, and grabbing nine rebounds. Battey is No. 2 in the camp in rebounding behind Bassey so far at 8.8 per game.

Langford Stands Out Among Wings

There are at least 20 players 6-foot-10 or taller at this year’s NBPA Top 100 Camp and plenty more 6-foot-9, but the shooting guards and wings have not been outdone. The best of the lot through two days is 6-foot-5 Romeo Langford, the 2015-16 national sophomore of the year out of New Albany (Ind.). Langford has great innate scoring skill and is a smooth operator in terms of making the correct offensive play. He is also excellent at scoring on all three levels and is uncanny at finding seams around the basket to make a difficult shot look easy. The junior-to-be started the camp with a 19-point outing and is the camp’s second leading scorer (14.5) through the first four games behind Zion Williamson of Spartanburg Day School (Spartanburg, S.C.). The rugged wing is a load at 6-foot-7, 220-pounds, and similar to Langford, is a 2018 prospect. He knows how to use his wide shoulders and body to power his way to the basket, but also has a quick first step in short quarters to blow by unsuspecting defenders. Williamson reminds us a bit of 1978 Mr. Basketball USA Mark Aguirre of out Westinghouse of Chicago. Aguirre went on to be the No. 1 pick of the 1981 NBA Draft and a NBA all-star forward who could score with the best of them.

Alex O’Connell, a lanky 6-foot-6 shooting guard out of Milton (Ga.), is fourth in the camp in scoring (12.5 ppg) behind Battey. O’Connell is one of those 2017 prospects that should shoot up the various national player rankings charts in his performance at this camp is any indication.  He’s a solid athlete who can hit the deep jumper with regularity, which makes his fundamentally sound pull up game even that much more dangerous. O’Connell also excels in the drive and dish game and is an engaged defender. If he closes out the camp strong over the next two days, he’s in good position to be considered a top five performer at the event.

The guards, of course, dictate most of the action in camp settings and for the most part the play has been unselfish and what an astute observer would expect. Now, there is a difference between being selfish and making the incorrect read either in the half court or transition and nearly every lead guard here must improve in the decision-making department. Two that have stood out with their play-making and decision-making are Lavar Batts Jr., a 6-foot-2 point guard out of Jay M. Robinson (Concord, N.C.), and 5-foot-11 Tremont Waters, a 5-foot-11 dynamo from South Kent Prep (Kent, Conn.).

Batts is excellent at splitting double teams and getting in the key to finish or set up teammates. The flashy guard also knows how to push the ball in transition and make the simple, relaxed pass for a finish. Batts is prone to an occasional bad decision as every high school aged-guard is, but his overall play-making skills are excellent. He’s averaging eight points and nearly four assists per game.

No guard at the NBPA Top 100 camp is more skilled in finding cutting teammates or finding an acute passing lane than Waters. He has total command of the ball and uses his low gravity frame to keep bigger, longer defenders off balance and away from the ball. Waters does need to improve his work off ball screens, but overall his attack game and decision-making is excellent in the open court and in the half court. He leads the camp in assists (6.8 apg) by more than one full assist and is averaging 8.8 ppg.

Athletic guard Jaylen Hands from Balboa School (San Diego, Calif.) is second in the camp in assists so far is is one of the best scoring lead guards in attendance (10.8 ppg).