This is what happened when a Kings’ fan brought his homemade sign saying, “D’Angelo leaked Hillary’s email” to Thursday’s game between the Lakers and Kings. According to the fan, Metta World Peace thought it was funny (no surprise) and Matt Barnes gave him a thumbs up (really no surprise) but one person who didn’t find the sign amusing was D’Angelo Russell (again, no surprise).

Russell not only didn’t laugh at the Clinton & Swaggy P reference, he told the fan to “suck his dick” and then told the Kings security the “derogatory” sign was “antagonizing him.” 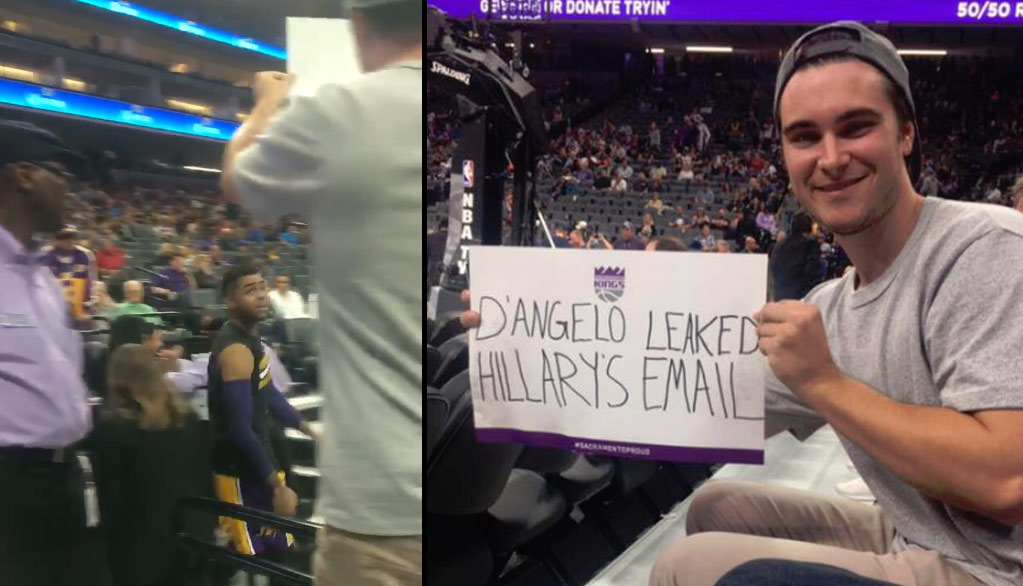 Here’s the fan’s full story, which was posted to his Facebook page.

So last night I get a chance to attend the Kings vs. Lakers game at the beautiful new Golden 1 Center. Thanks to a close friend our seats were right next to the Lakers bench. So of course we get in a little old fashion heckling on D’angelo Russell because frankly he deserves it. So I make this sign “D’angelo leaked Hillary’s emails” and start showing it around. Get a laugh from Metta Worldpeace, a thumbs up from Matt Barnes. But then I get D’angelo walking out of the tunnel with the sign where he turns directly at me, looks in my face and yells “suck my d*ck” (volume up on video). Classic style. Then to make it even better, D’angelo went on to show his true snitch colors by telling on me to Kings security, saying I was antagonizing him and that my sign was “derogatory”. Never change D’angelo #sacramentoproud #kingsnation #stopsnitchin

He was also brave enough to respond to a bunch of hostile sounding critics of his sign and hecklers in general with this Instagram reply.

Damn might need a safe space for all these upset comments. I made that sign the other night and here’s the facts behind the story: 1) The sign was hilarious, Kings fan or lakers fan. Unfortunately Donald trump is our president now, I figured we could all use a little political humor in a time like this. 2) I posted this video to fb to show my friends (mostly sac Kings fans) with no intent of it blowing up and reaching the angry laker fans on Instagram who live in their moms basement, played a few minutes on their middle school hoops team and now want to talk about the integrity of basketball. I guess if posting a video to my personal fb for laughs makes me “playing the victim” or “snitching” then yep call me whatever u need to defend the fact D’angelo gets rattled by a 25 year old drunk kid with a small sign. I think you can clearly tell by my laugh at his reaction, I never once felt victimized or was looking for sympathy. Quite the opposite actually, was stoked I could get in his head and get a reaction. If you’re a lakers fan and catch boogie cousins saying SMD to u on camera, you’re probably sharing it with your friends right? PS I had no idea the whole interaction was on video, was actually sent that from another fan sitting behind me. Hope that clears it up, and look for me at the next Kings lakers game with a new sign. (Don’t worry I’ll include a “trigger warning” as to not offend anyone else)

As for the game, the Lakers came back from 19 to pull off a 10 point victory, which ended with some trash-talking between Julius Randle and Boogie Cousins and one happy looking D’Angelo Russell. 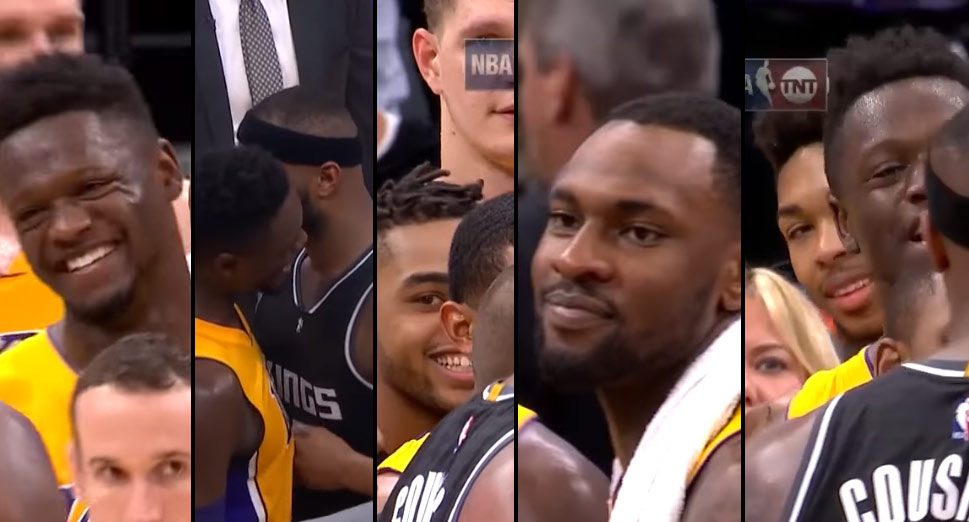