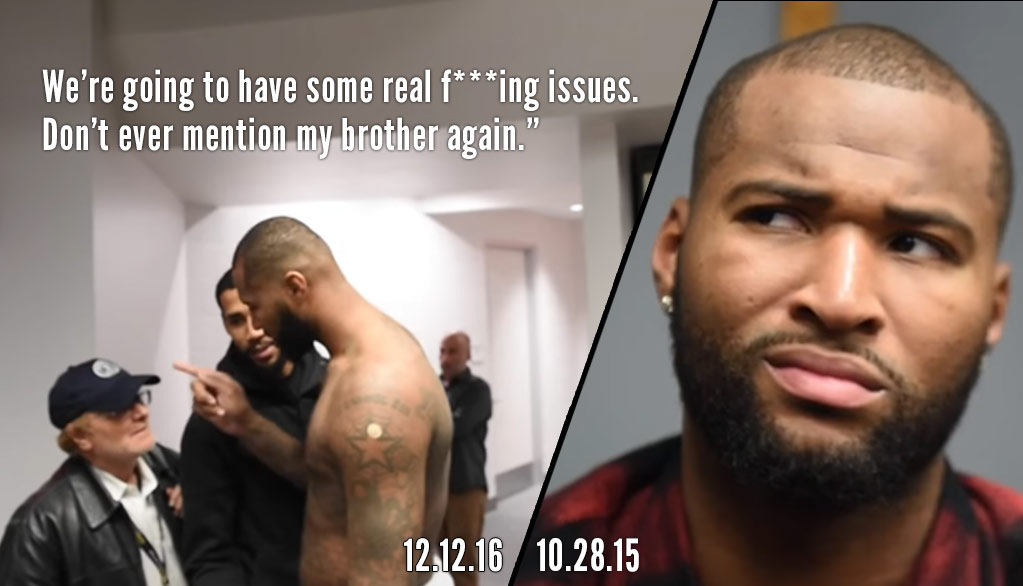 On Friday night, DeMarcus Cousins outscored and rebounded Marc Gasol 22/9 to 20/6 and helped the Kings beat the red-hot Grizzlies (winners of 7 of their last ...(Read more)

On Friday night, DeMarcus Cousins outscored and rebounded Marc Gasol 22/9 to 20/6 and helped the Kings beat the red-hot Grizzlies (winners of 7 of their last 8) 96-92. That’s worth some positive praise. Unfortunately, the only news to come out about the Kings and Boogie on this night is a video from earlier in the week of Cousins cursing out local Sacramento Bee columnist Andy Furillo.

“We’re going to have some real f***ing issues. Don’t ever mention my brother again.” Yelled a finger-pointing Cousins at Furillo, who according to the SacBee has had his share of scares, from getting shot while covering the LA riots to having his life threatened while covering local criminals. “You don’t know my motherf***king brother.”

This was the first time Cousins has seen Furillo since the writer wrote an article about Cousins involvement in a New York club fight earlier in the month. In his article, he writes Cousins and Barnes should find “better places to hang out.” He also, for context, references Cousins’ younger brother getting arrested for his involvement in a bar fight earlier in the year.

“You say whatever the f** you want about me but don’t mention my motherf***ing family.” Cousins continued during his tirade against Furillo.

This might be news to a lot of people but this type of postgame behavior has reportedly happened many times in the past with the local media.

“He is a bully, to be sure,” said Bee columnist Ailene Voisin. “He bullies everybody. He bullies his coaches, his teammates, team employees, reporters.

“But this is the first time I have heard of him intimidating anyone physically,” she said. “He normally glares, stares and refuses to speak to the cluster of reporters if someone is present that he is annoyed with at that particular time. Or, he will simply refuse to answer a question from an offending reporter.”

The Kings released a statement saying they are looking into this and will “take the appropriate steps immediately upon it’s conclusion.”

The President of the Professional Basketball Writers Association also released a statement about the relationship between players and writers.

“Professional reporters or columnists and the people they cover will not always agree on what is written or broadcast. … But each side should treat the other with mutual respect and professionalism. An overwhelming number of NBA players – maybe 99.9 percent – treat the professional news media admirably.”