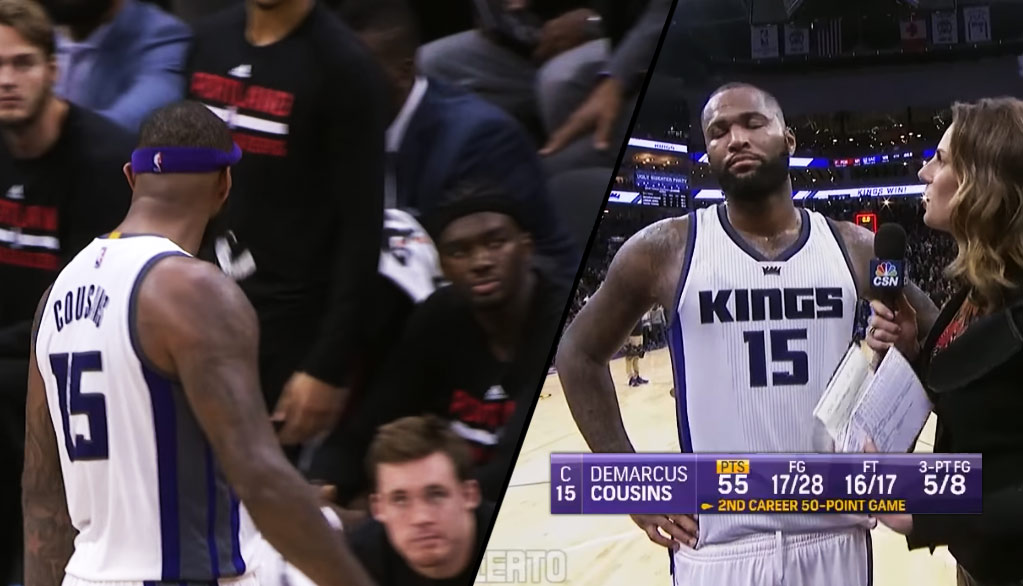 DeMarcus Cousins Furious After Scoring 55, Getting Ejected & Then Unejected

Ridiculous was Boogie scoring a season-high 55 points on 17 of 28 shooting with 5 threes. Ridiculous was Cousins scoring 17 in the 4th quarter where he was ejected for accidentally spitting out his mouthpiece. Ridiculous is the refs changing their mind about the ejection and bringing him back into the game.

“When I was going to the locker room I was thinking what I was going to break up first,” said Cousins, who was fined by the organization less than 24 hours earlier for cursing out a reporter. “But when I heard I had to come back to shoot free throws, I had to calm myself down.”

Ridiculous is all Boogie could think of during this postgame interview before he went into a rant which was muted by CSN.

“It’s obvious what’s being done out here,” he said. “I hope the world can see now what’s going on.”

Well, Blazers coach Terry Stotts didn’t think things were so obvious and felt Boogie was taunting the Blazers’ bench when his mouthpiece flew out of his mouth.

“From my vantage point, I thought that he taunted our bench and as he was taunting, the mouthpiece flew out,” Stotts said. “The referee asked me if it was his mouthpiece and I said that it was. Then he asked me if he threw it, then I said no he didn’t, and that’s why he came back. Whether it was intentionally spitting it out or not, I don’t know the intention.”