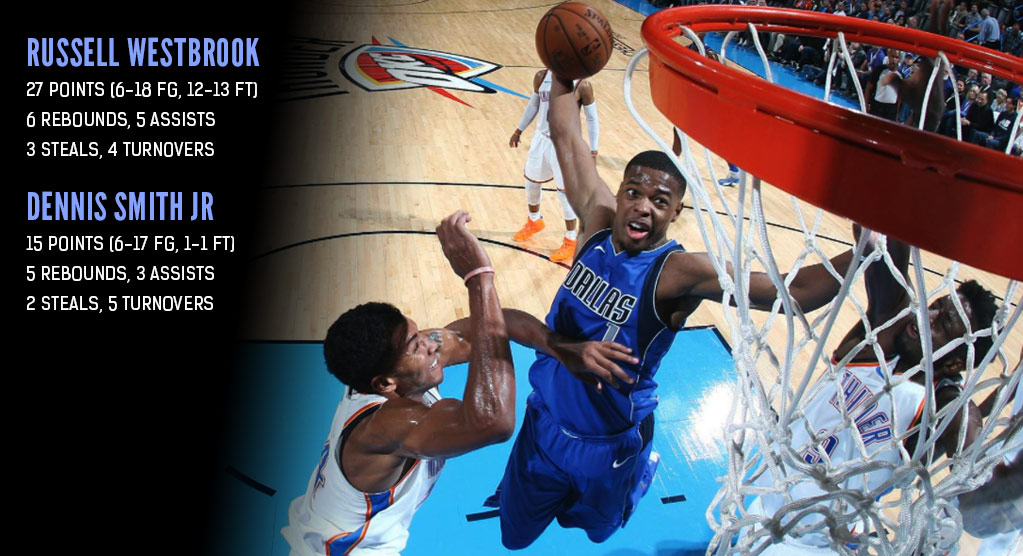 Dennis Smith Jr Duels With Russell Westbrook, Says “I Didn’t Know He Got That Many Calls”

Two of the league’s best rim abusers, MVP Russell Westbrook and ROY candidate Dennis Smith Jr, went at it for the first time on Sunday. Smith had a nice stat line of 15 points, 5 boards, 3 assists, 2 steals, 1 block and 1 murder attempt, which was prevented by Jerami Grant. Smith could make a case he was fouled on the murder attempt. Not only did he not get the whistle, he only went to the free throw line once.

As for Beastbrook, he celebrated his 29th birthday with 27 points, 13 free throws attempts and a win for the Melo-less Thunder.

After the game, Smith was asked about his “fun match-up” and if he learned anything about Westbrook by playing against him as opposed to watching him.

“I didn’t know he got that many calls.” Smith replied. “But he’s a really good player.”

In the other locker room, Paul George was asked if got Westbrook anything for his birthday. He replied, “I got him 37,” referring to the game-high 37 points he put up, along with 8 boards and 5 assists.

This performance is coming two days after PG13 scored a season-high 42 with 9 boards and 7 assists in a win against the Clippers.