Shocking news from this weekend:  UNLV bound Derrick Jones participated and won a dunk contest!  Actually it’s not shocking at all to see the unbeatable 6’6 Jones, who said “I don’t lose too many dunk contests. It’s what I do” after winning the Ballislife All-American dunk contest last month, win another contest.  The City of Palms Dunk Contest winner who had arguably the best dunk in high school basketball last year and was recently seen doing a windmill from the free throw line beat Unique McLean, Trevon Duval and Rayjon Tucker at the 2015 Mary Kline Classic Dunk Contest at West Orange HS in New Jersey.

The highlight of the contest was him jumping over 4 people, including a 7 footer! Wait, who is the judge holding up a 9?! Is that Rondae Hollis Jefferson? 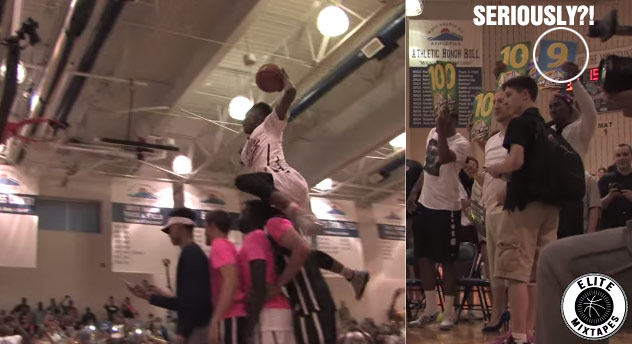 His 360 between the legs and windmill off the side of the backboard were pretty nice too….just not as nice as this absolutely sick windmill from the free throw line!

DUNK OF THE YEAR!?