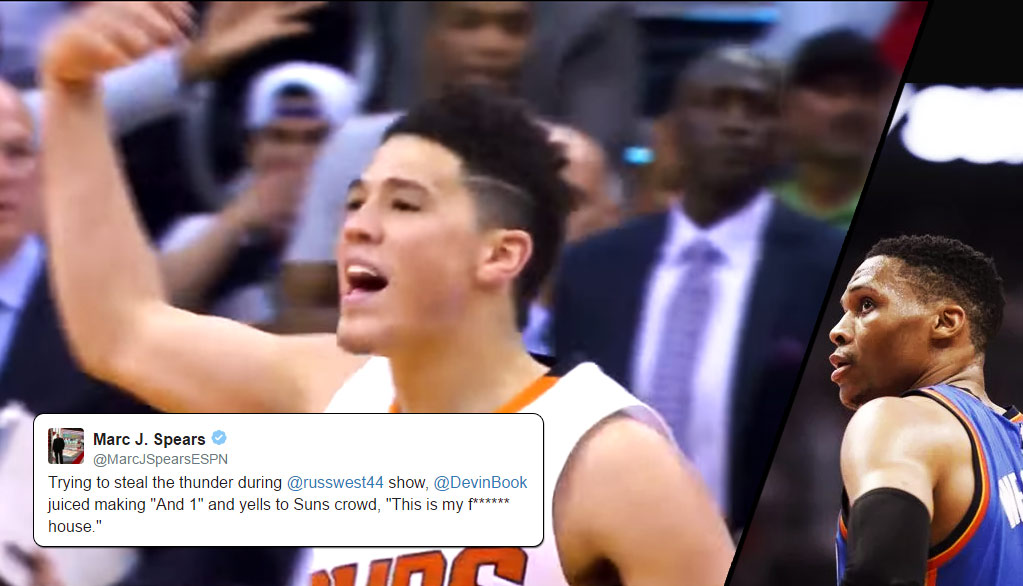 Whoooooo’s house? It’s the Suns’ house (Run DMC fans should get it)! Actually, the Phoenix Suns’ house belonged to Devin Booker on a night that was ...(Read more)

Devin Booker Scores 21 Of His 37 In 4th, Lets Westbrook & Fans Know This Is His F’n House

Whoooooo’s house? It’s the Suns’ house (Run DMC fans should get it)!

Actually, the Phoenix Suns’ house belonged to Devin Booker on a night that was supposed to belong to just Russell Westbrook. The 20-year old next coming of Kobe scored 21 of the Suns’ 25 4th quarter points and 37 of his total points to beat the Thunder by 21 and snap the Suns’ 13-game losing streak. The 21-point quarter also gave Booker a league-leading six 20-point quarters. Steph Curry and Westbrook are tied at second with five.

The biggest story of the fourth quarter wasn’t Booker’s offense but the Suns defense on Westbrook, who became the first player since The Big O to average a triple-double for a season. The Suns intentionally committed fouls in the final quarter to prevent him from picking up a NBA record 42nd triple-double.

“From the start of the game, Russ was chasing history,” Booker said. “Unbelievable player. I’m sure he’s going to get it. I’m happy it wasn’t here but we locked in defensively.”

Westbrook dismissed the idea that the Suns prevented him from breaking Oscar Robertson’s record.

“My main goal since I got here, especially this season, is to win a championship,” Westbrook said. “If I wanted to get 10 assists, I could get 10 assists. Everybody wants to see the record broke, but it’s bigger than that for our team and for me.”

Well, his main goal might be to win a championship but you can’t convince me his and his teammate’s main goal on Friday night wasn’t all about his personal stats. He came out shooting and missed his first 11 shots and finished the game 6 of 25 from the field. He was also still in the game long after the game was over. And that’s why the Suns made an extra effort to prevent another triple-double and that’s why Devin Booker made sure the Thunder and local fans knew this was his house.

Trying to steal the thunder during @russwest44 show, @DevinBook juiced making "And 1" and yells to Suns crowd, "This is my f****** house."