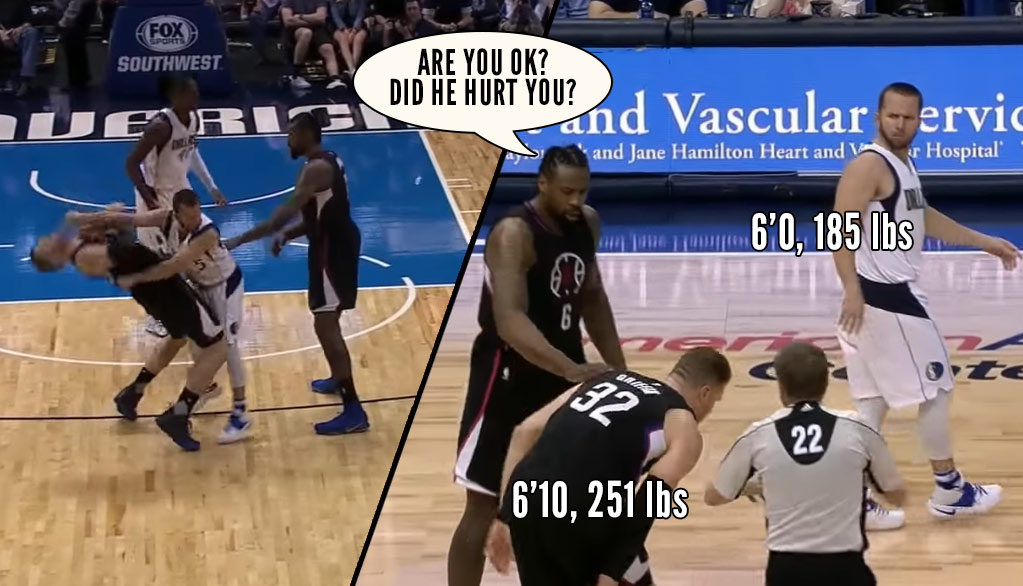 J.J Barea is 6’0 tall and weighs 185 pounds with high heels and after a big meal. Blake Griffin is 6’10, about 251 pounds with the body of Men’s Health cover model — he’s actually been on the cover of Men’s Health. During the third quarter of the Mavs win over the Clippers, Barea was ejected after being called for a flagrant foul 2 for knocking Griffin to the ground. In the eyes of Barea, his teammates and the ones in my head, all we saw was some great acting.

“I was getting squeezed and my guy was going to be open, so I pushed him out of the way.” Said Barea, who received a standing ovation from the crowd. “They took it over the top. I never hit him in the face or anything.”

“It energized the building, got our team going on a certain level,” coach Rick Carlisle said. “But watching Griffin’s cat-that-ate-the-canary smile tells you the whole story about that play. That’s all you have to look at.”

In the eyes of crew chief Bill Spooner, it was a good call.

“The contact, in our judgment, was deemed unnecessary and excessive. The contact was to the shoulders and above to the throat. That is deemed as a flagrant penalty two.”

As silly as the call was, it did spark the team and they got their revenge on Blake in the seconds by stealing the ball from him with three seconds left in regulation to seal the victory.