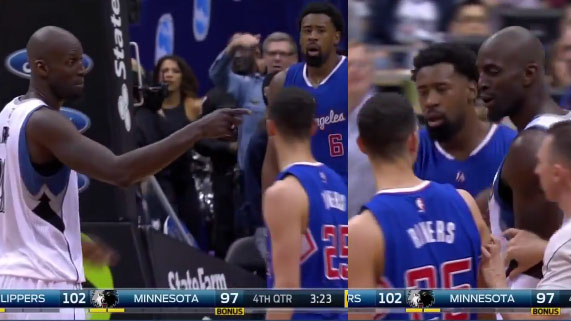 “I thought Austin should have punched him, personally,” said a smiling Doc Rivers about his son Austin getting into it with Kevin Garnett during last night’s Clips ...(Read more)

“I thought Austin should have punched him, personally,” said a smiling Doc Rivers about his son Austin getting into it with Kevin Garnett during last night’s Clips & Wolves game.

Late in the 4th quarter KG took exception to a bump by Austin and the two were given techs for jawing at each other.

“I was walking to my bench, and he was in my way, and I wasn’t moving,” Rivers said.

Supposedly KG and Austin had an earlier exchange which was still boiling in Rivers.

“He elbowed me in my head, and that’s not going to fly, really,” said Rivers. “I have all the respect in the world for him. He’s one of the best players to ever play the game, but at the end of the day, I’m a man just like he is, and that’s all there is to it.”

Lucky for KG, who is known for being all bark, things didn’t get more physical or he would have been thrown in consecutive games.  And nothing personal against Austin but lucky for KG it wasn’t Doc who wanted to punch him because anybody who remembers Doc during his playing days knows he’s willing to back up his talk.