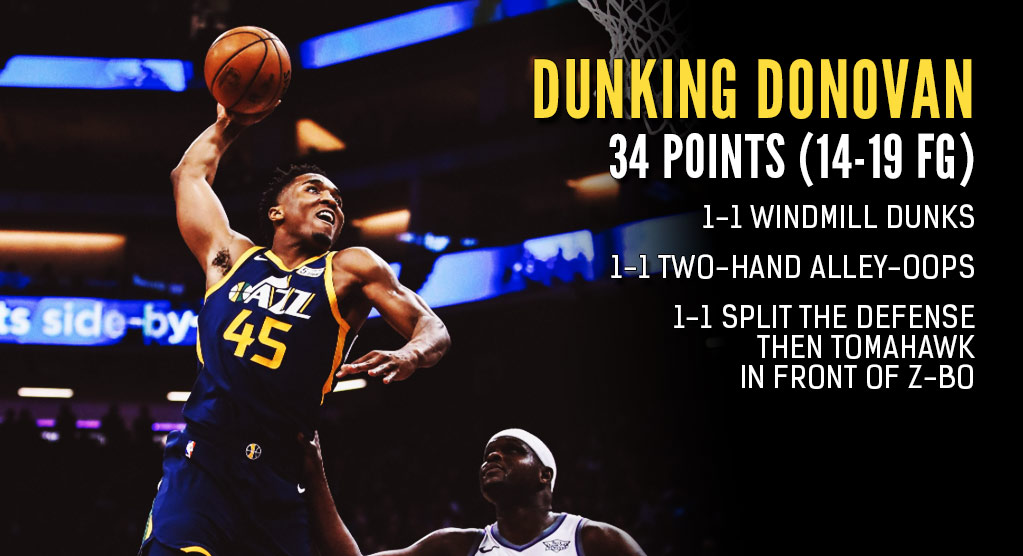 Rookie of the year candidate Donovan Mitchell strengthened his campaign on Wednesday by getting up and putting up 34 points on 14-of-19 shooting vs the Kings! ...(Read more)

Three of those 14 made shots against the Kings were dunks: a windmill in the first quarter and a two-hand alley-oop and one-hand dunk that Zach Randolph wanted nothing to do with in the third.

“I fed off of this one just because somebody in the crowd was talking and I heard them the entire time,” Said Mitchell about his spectacular splitting the defense and throwing down in front of Z-Bo dunk. “Usually I don’t let that get to me, but when you’re up by that and we’re all playing well it’s easy to think about other things.”

One of the the things I kept thinking about is what Vince Carter was thinking about while watching Mitchell’s electrifying performance; The former dunk champion and NBA Rookie of the Year was a DNP on the Kings’ bench on this night and I’m assuming he has to see some Vinsanity in Mitchell’s high-rising game and rising popularity.

Speaking of the dunk contest, here’s what Mitchell had to say about possibly participating in the upcoming event.

“I’d love to do that, but there are a lot of guys in the league who have bounce, who have dunk-contest bounce as opposed to game bounce,” Mitchell said. “People don’t understand, they’re two different things. You could do tricks in the dunk contest that you can’t do in the game. I would enjoy it.”

It’s good to hear a player actually say they would like to do the event and “would enjoy it” since it feels like the NBA has to beg popular players to agree nowadays. During a recent episode of the always hilarious I Am (Michael) Rapaport podcast, Mitchell even said he wants to do the event even though he doesn’t believe he can win it. He then joked about how he’s done 10 dunk contests against Derrick Jones Jr and lost all 10 (one of those was at our Ballislife All-American Dunk Contest).

After a disappointing performance last year, I don’t think Derrick Jones or Aaron Gordon (who wants to be in the 3PT contest) will want to do the event again. Zach LaVine is coming off an injury so he’s not going to do it. I’m betting the competition is going to include last year’s winner, Glenn Robinson III, and a few rookies like Dennis Smith Jr, De’Aaron Fox and Terrance Ferguson. If that’s the case, I’m not betting on Mitchell to win but I will cheer for him and will increase my bet that he wins the Rookie of the Year award.