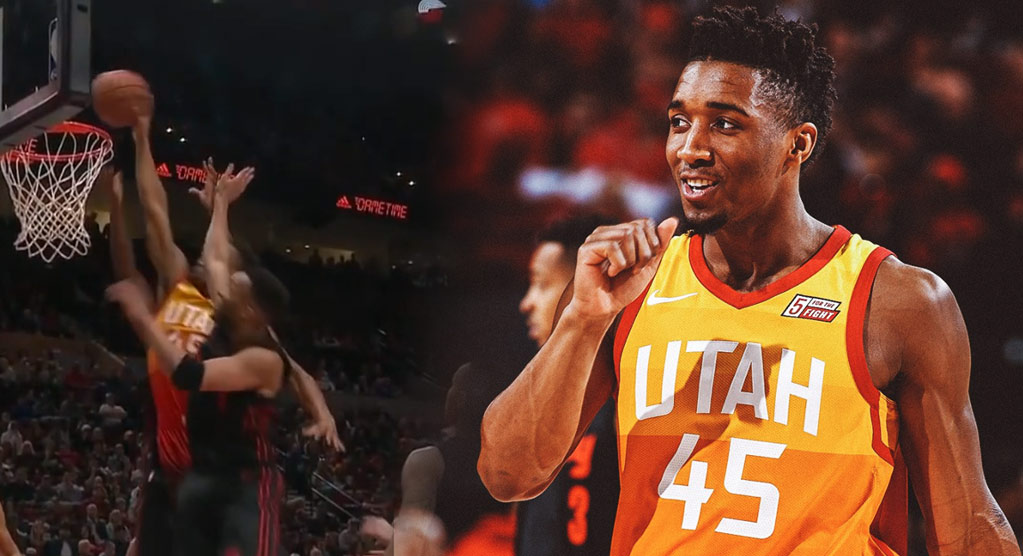 Donovan Mitchell scored 27 points on Sunday as the Jazz beat the Blazers, pushing their win streak to an impressive nine! After the game, the Rookie of ...(Read more)

Donovan Mitchell scored 27 points on Sunday as the Jazz beat the Blazers, pushing their win streak to an impressive nine!

After the game, the Rookie of the year candidate received some high praise from former unanimous Rookie of the Year Damian Lillard.

“I think he should be Rookie of the Year for sure, not just because of his numbers but his impact on their team. He’s basically leading them and it’s special to see a rookie be able to do what he’s doing out there. He’s able to get to the rim, he shoots the ball with ease, just not afraid — really aggressive,” Lillard said.

The highlight of the game came in the first half, when the 2018 NBA dunk contest contestant missed a shot around the free throw line, followed the miss and threw it down with one-hand over two defenders. It’s a play reminiscent of one of the most famous plays by three-time (should have been five-time) NBA dunk contest champion Dominique Wilkins.

Like the Human Highlight Film, Mitchell has been generating highlight dunks and plays on a nightly basis. And the two players have something else in common that most people probably don’t know.

Wilkins was drafted by the Jazz with the 3rd pick in the 1982 NBA draft. Nique wasn’t exactly excited to be playing in Utah or the power forward position for the Stockton and Malone-less Jazz so the team traded him to Atlanta for John Drew, Freeman Williams and a million in cash. It’s considered one of the worst draft trades ever but considering how loved Nique was in Atlanta and Stockton and Malone was in Utah, I think the trade turned out well for both.

And I know it’s very early in Mitchell’s career, but I don’t have a problem saying the Jazz trading the 24th pick (Tyler Lydon) and Trey Lyles on draft night for Mitchell (drafted too low by the Nuggets at 13) is one of the best decisions the franchise has ever made.