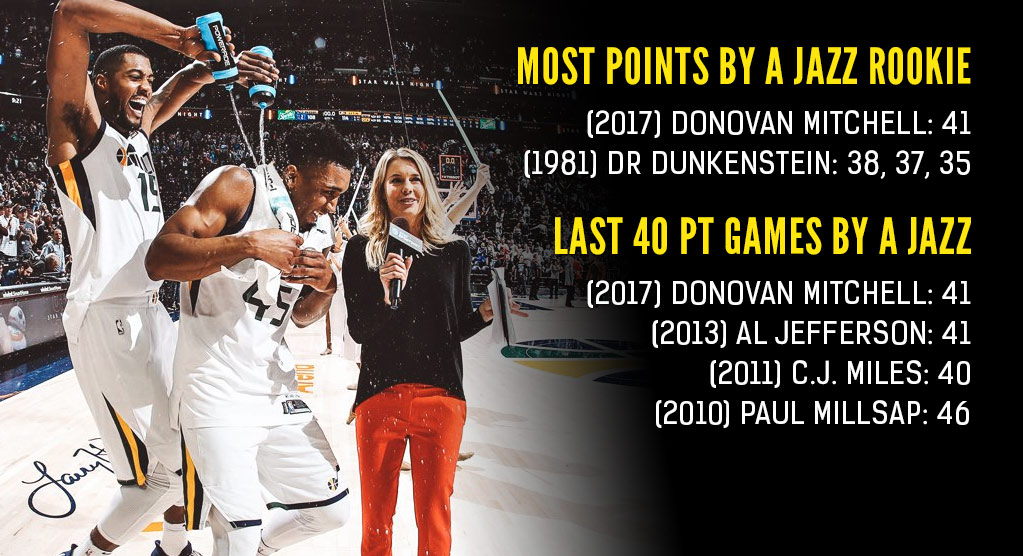 One day after Austin Rivers did his best impersonation of Samuel L. Jackson raving about Donovan Mitchell (“That little motherfucker is good. That dude’s a rookie. ...(Read more)

One day after Austin Rivers did his best impersonation of Samuel L. Jackson raving about Donovan Mitchell (“That little motherfucker is good. That dude’s a rookie. He’s crazy” and he’s “the best rookie in the NBA, bottom line. That motherfucker is out there leading a team as a rookie.”), that motherfucker went off for a career-high 41 points, including 17 points in the fourth quarter of a win against the New Orleans Pelicans.

“I don’t have any words, to be honest,” Said Mitchell, who broke Darrell “Dr Dunkenstein” Griffith’s rookie records of 35, 37 and 38 points. “I had Jonas in my ear saying keep taking those shots. Even shots that may not always be good shots, he says keep being aggressive. Coach’s saying it. Everybody’s saying it.”

And everybody in the crowd was saying his name and even gave him the first standing ovation in Utah that I can recall since rookie Sundiata Gaines hit a game-winner against the LeBron and the Cavs seven years ago! I’m exaggerating a little but I couldn’t refuse an opportunity to mention Sundiata.

“The fans are incredible. Just like Louisville. I’m speechless, but it was great to have that ovation. I’m pretty sure I was smiling for about the last six points I scored. Still smiling now.”

And I’m sure he would smile even more if he heard the only active NBA players with a 40-point game on their rookie resume are Carmelo Anthony, Steph Curry, Kevin Durant, Eric Gordon, Blake Griffin, LeBron James and himself. Jazz fans are also smiling because this is just the fourth 40 point game they have seen by a Jazz player since 2010; Paul Millsap had 46 in 2010, Al Jefferson 40 in 2013 and CJ Miles 40 in 2011.

Can we get Austin Rivers doing Sam Jackson talking about the Nuggets draft picks? Remember Raef Lafrentz (#3) and Nikoloz Tskitishvili (#5)?

INSIDE THE NBA: MITCHELL’S CAREER-HIGH