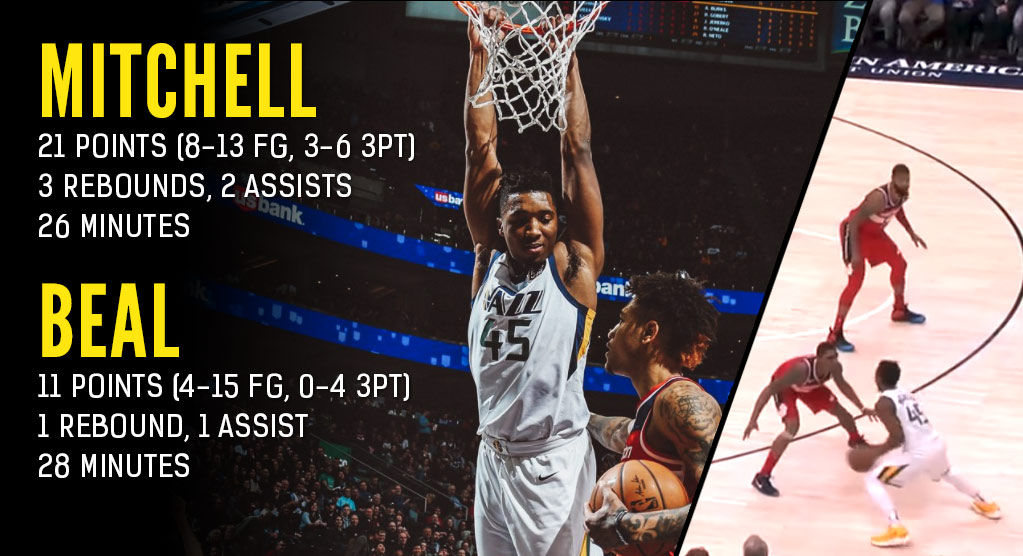 As an encore to his career-high 41, rookie Donovan Mitchell knocked down 8-of-13 shots (3-6 3PT) and finished with 21 points in just three quarters. The ...(Read more)

As an encore to his career-high 41, rookie Donovan Mitchell knocked down 8-of-13 shots (3-6 3PT) and finished with 21 points in just three quarters. The reason why he only played three is because the Jazz (with Rudy Gobert back in the line-up) was beating the Wall-less Wizards 88-50 at the end of the 3rd quarter.

Wizards’ All-Star candidate Bradley Beal only managed 11 points on 4-of-15 shooting in 28 minutes of action. He was so off, he put up a donut from three and even missed two of his five free throws.

As for the rookie (the Denver Nuggets drafted and gave away to the Jazz), he’s scored 20+ in four of his last five games, while averaging just 31 minutes a game. At 16.6 points a game, he’s only trailing Kyle Kuzma (16.8) and Ben Simmons (18) on the points per game by a rookie leaderboard. If you go by points per 48 minutes, he has a 1.6 point lead over Kuzma and 3.4 point lead over Simmons.