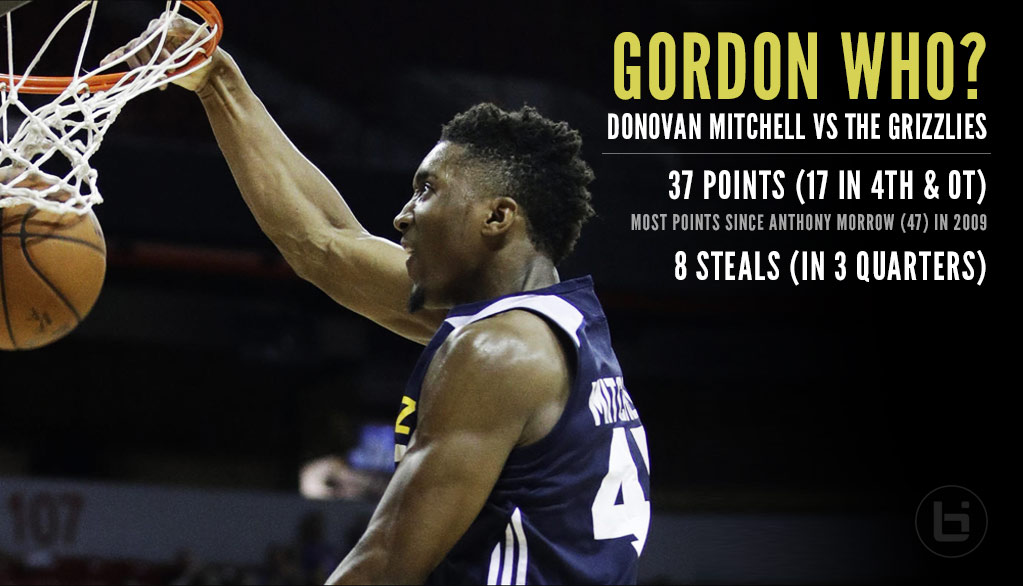 The last time I talked about Donovan Mitchell (after he stared down and dropped Jayson Tatum), I said, “I’m not saying draft steal and former Ballislife ...(Read more)

The last time I talked about Donovan Mitchell (after he stared down and dropped Jayson Tatum), I said, “I’m not saying draft steal and former Ballislife All-American Donovan Mitchell is going to make the people of Utah forget about Gordon Hayward — or as some silly fans would say “Gordon Betrayward” — but he’s going to give them plenty of reasons to cheer next season.”

I might be wrong. And I know it’s Summer League but the No. 13 pick in the draft has been dominating over the past week and on Tuesday against the Grizzlies, the 20-year-old rookie and new Adidas endorser scored a summer league-high 37 points (17 in the 4th quarter and OT and the most since Anthony Morrow scored 47 in 2009) in 34 minutes with 8 steals in the first three quarters.

“I sat there and watched Wayne (Selden) have 28 against Washington, and I said to myself, ‘That’s not happening today. Somebody else is going to have to step up.’ I mean, just having that mentality.”

And that mentality is going to make him a fan favorite in Utah and a few Utah fans replace their burnt Hayward jerseys with Mitchell ones.

He’s already made a fan out of former All-Star Baron Davis.

“From the time I’ve met him, to every time I’ve watched him play, he’s just better. That’s rare,” Davis said via NBA.com. “He’s tough. He loves the game. And he’s willing to learn. Every time a coach gives him tools, it’s like he’s applying. I just think he’s gonna be a great player.”