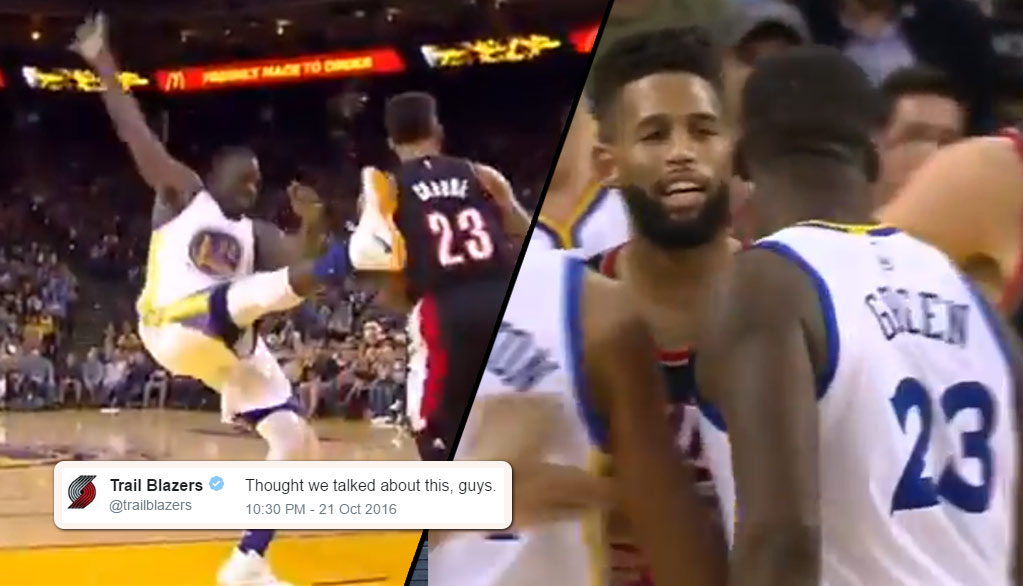 After being suspended for game 5 of the NBA Finals, you would think Draymond Green would never kick his legs in the air again. I don’t ...(Read more)

Draymond Green & Allen Crabbe Had To Be Separated After Draymond Kick

After being suspended for game 5 of the NBA Finals, you would think Draymond Green would never kick his legs in the air again. I don’t mean just in games, I mean he wouldn’t even kick his legs up on a recliner chair, watch the Karate Kid or listen to a Tribe Called Quest song. I was wrong.

Midway through the 2nd quarter of the Warriors and Blazers game, Draymond Green almost kicked Allen Crabbe on a drive, which led to Crabbe saying something to Green, who responded with a light push.

Since it’s preseason, it’s unlikely the league will even give Green a warning for this but hopefully he finds a way to stop doing this and reminding Warriors fans the results of his actions in last seasons playoffs.

Draymond X A Tribe Called Quest – “Can I Kick It?"

Can Draymond Green Kick It? Yes he can.https://t.co/isFqnGDk3z