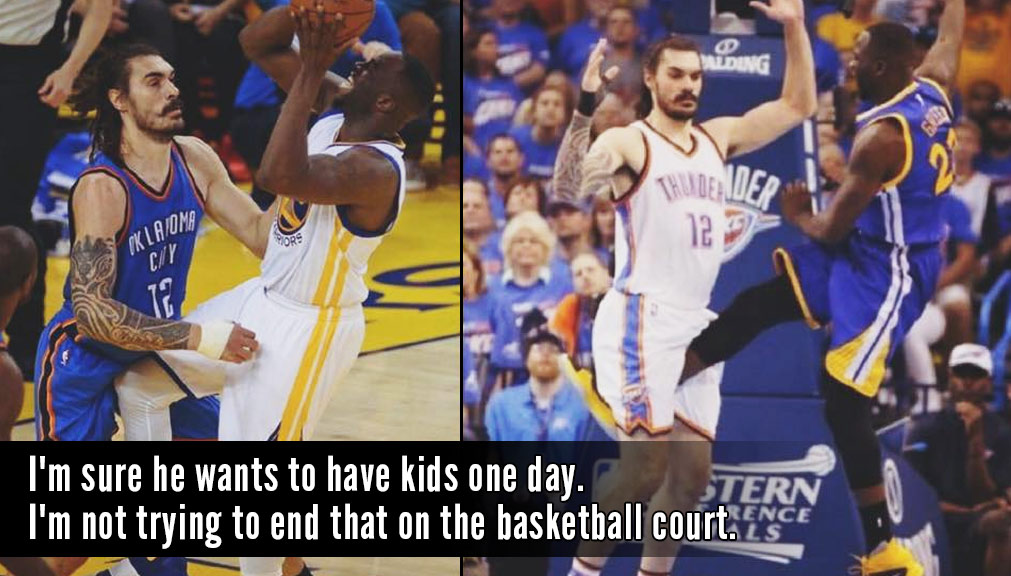 So what hurts more than getting kicked in the groin? How about being down by 41 in the 3rd quarter of a playoff game. On Sunday, ...(Read more)

So what hurts more than getting kicked in the groin? How about being down by 41 in the 3rd quarter of a playoff game. On Sunday, the Thunder massacred the Warriors in GM3 and one of the biggest stories from the game was a flagrant foul by Draymond Green on Steven Adams, if it was intentional and if deserves a suspension.

“I mean, it happened before, mate,” said Adams about the foul. “He’s pretty accurate, that guy.”

After his 1 for 9 performance, Green explained why the foul was not intentional.

“I followed through on a shot,” Green told reporters after the game. I’m not trying to kick somebody in the men’s section. I’m sure he wants to have kids one day. I’m not trying to end that on the basketball court. That don’t make sense. I brought the ball over the top this way [makes motion], he fouled me and I brought my leg up. I mean, I know my core’s not strong enough to stop my leg halfway from wherever it was going.

“Honestly, I didn’t know I hit him. I walked to the 3-point line and clapped everybody’s hand, and I turned around and he was on the floor. I’m like, ‘What happened?’ I’m standing at the 3-point line, I look at [Andrew] Bogut and he looked at the replay and he was like: [Cringes.] So then I looked at the replay like, ‘Uh oh.’ But like I said, I thought it would get rescinded because I’m not trying to kick him.

I was following through on the shot and my leg went up. So, no, I don’t think I’ll get suspended. I don’t know how anyone could possibly say I did that on purpose, regardless of the way it looked.”

“Stuff like that happens all the time,” Kerr said. “There’s contact, people’s arms, legs flailing. If they think it’s on purpose, play the game, you know. This stuff happens all the time. [Russell] Westbrook kicks his feet out on every 3, and there is contact. I mean, that’s just part of the game. So I don’t understand how that can be deemed a flagrant 1. I think it should be rescinded.”

“Honestly, I think it’s intentional,” Westbrook said. “That’s two times in the last two games. I don’t think you can keep [hitting] somebody in their private areas.”