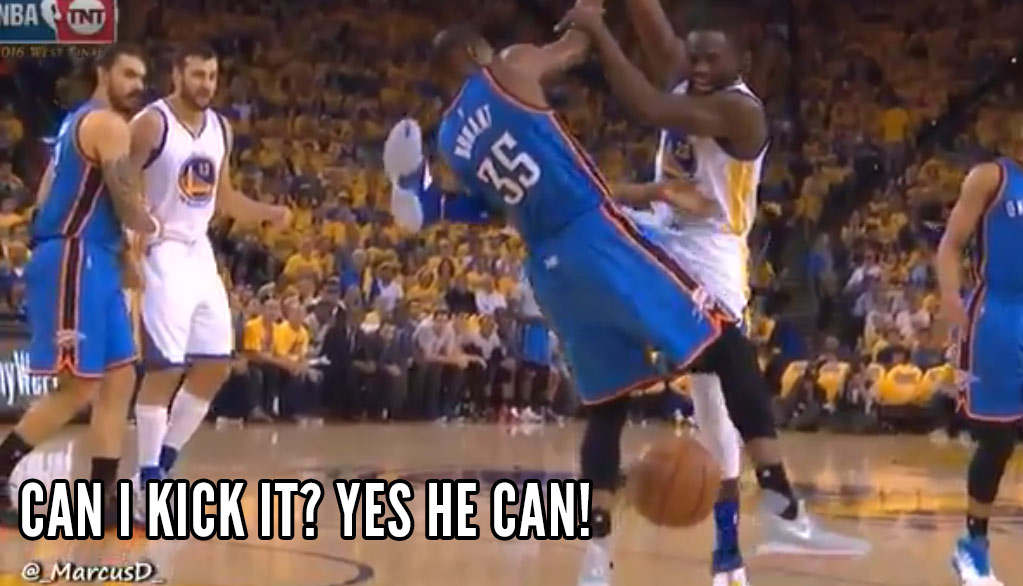 Draymond Green Gets Away With Kicking Durant, Almost Kicking Westbrook & Roberson In The Face During GM5

Can I kick it? Yes you can.
Can Draymond kick it? Yes he can.
Will he ever get in trouble for it? No he wont’.
Well I’m gone. Go on then!

First off, RIP to the great Phife Dawg. OK, now on to game 5, where once Draymond Green reminded us that he either likes to kick it or has absolutely no control over those active legs of his. Or maybe, Green is just trolling complaining fans because he knows the NBA isn’t going to do anything about his balls to shoulder kicking habit.

And if that above kick to KD wasn’t enough, he almost landed a kick to the face of Westbrook and Roberson in the same game.

Surprisingly, the refs did hit Green with a tech in the 3rd quarter after he complained about a foul on Kevin Durant.

And because of that tech, they ignored this taunting yell at Serge Ibaka.

So in honor of Phife and Draymond, here’s the Tribe’s classic video for “Can I Kick It.”

And i’m dedicating “1nce Again” to the refs and the league.