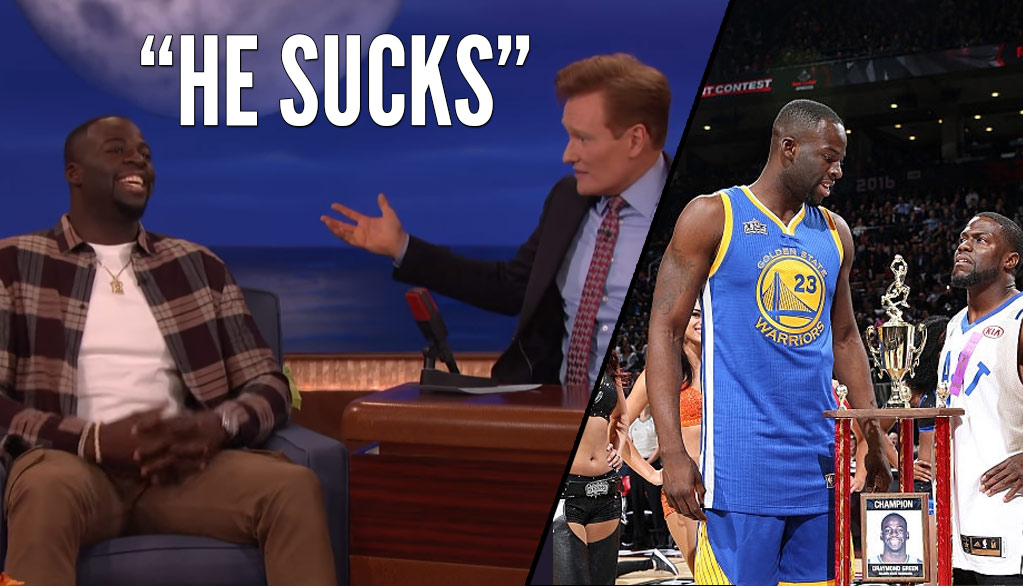 Draymond Green stopped by Conan on Tuesday night and shared some amusing stories about his Mom talking trash to him during games, playing credit card roulette ...(Read more)

Draymond Green stopped by Conan on Tuesday night and shared some amusing stories about his Mom talking trash to him during games, playing credit card roulette with his teammates and recruiting new teammate Kevin Durant. But the story most people will be talking about is him saying, “he suck” when asked about Kevin Hart saying he’s great at basketball.  He also said, “No!” when asked if Hart has a 3-point shot. Sucks? No? He looked pretty good during All-Star weekend when he messed up a scripted 3-point contest by tying Draymond Green’s score.

When asked about choking at All-Star weekend, Draymond said, “He hit a couple of spots where he shot well and I was shocked.”

He also said what makes Kevin a great comedian is the 4 x Celebrity Game MVP believes in what he says. That’s true, but more so because he’s very funny, likable, can deliver a punch line and knows how to close a show. That actually sounds like Draymond if you replace “punch line” with “punch to the groin” and remove the part about closing a show.

You can watch more clips from Draymond’s appearance on Conan by clicking here.