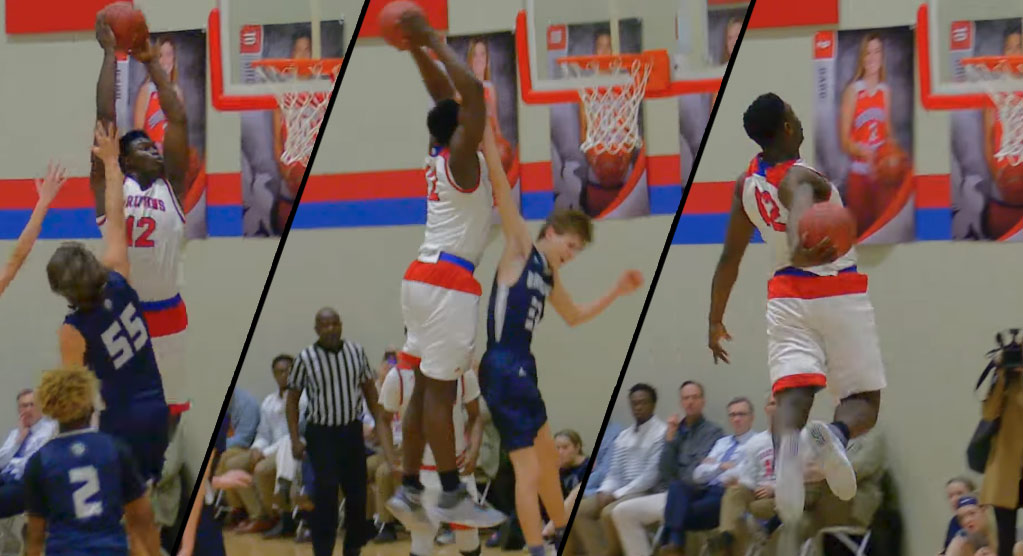 Attempting and missing a between-the-legs dunk during a rivalry game would normally be a big deal and result in a benching. Zion Williamson did that on ...(Read more)

Attempting and missing a between-the-legs dunk during a rivalry game would normally be a big deal and result in a benching. Zion Williamson did that on Monday night and did take an early seat on the bench. But, he didn’t leave the game early because he missed a flashy dunk, it’s because his Spartanburg team was beating Oakbrook Prep 82-35 with five minutes left in the game.

The new Duke commit finished with 37 points, 13 boards, 5 steals, 3 blocks and a bunch of standout dunks — including a two-hand poster, a slingshot, a baseline over two defenders and a 360 — during the 48-point win.

The highlight of the game for me wasn’t any of those dunks but seeing tiny No. 4 on the opposing team try to guard the man-child one-on-one.

“I don’t sell, like, ‘When you come here, the university and the state will take care of you the rest of your life,’ ” he said. “You may buy that, and I’ve got some great property in some swampland down in Florida to sell you, too.”

“Every one of us in this country is based on you’ve gotta take care of yourself. And then when you make it, you make sure that you’re helping [others]. And along the way you bring other people with you,” Calipari said. “And that’s what we’re trying to do, just give these guys the best opportunity. We’re not trying to say this university or this state will take care of you the rest of your life. There’s no socialism here. This stuff is, ‘You’ve gotta go do it and we’re gonna help you do it.’ Some [recruits] like that. Some don’t like it.”

“We don’t get every kid, and I’ve said that all along,” Calipari said. “We get the ones that need to come here. Others choose not to, and that’s fine. That’s their choice. Obviously the kids that have come here are worth over a billion dollars [in NBA contracts]. Seventeen have graduated, 35 or whatever have gotten drafted, three No. 1 picks.

“Kids that have come here belonged here. Doesn’t mean everybody needs to come here. They don’t. I don’t think it’s changed much at all.”