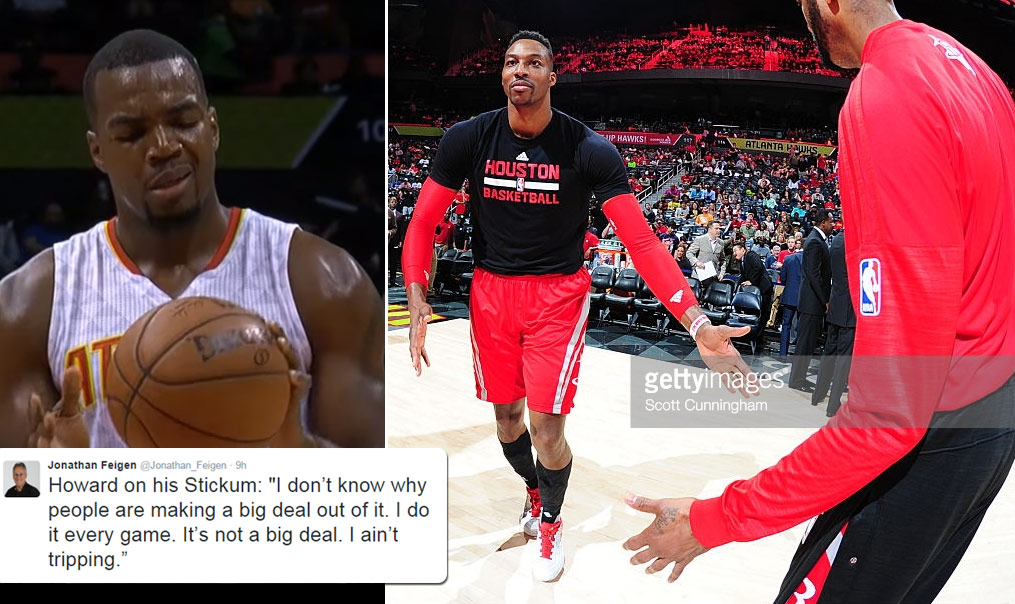 You know that look and/or feeling. When someone hands you something and it feels like a bodily fluid (I didn’t say what part of the body) ...(Read more)

Dwight Howard Busted For Using Illegal Stickum In The Game, Says It’s Not A Big Deal

You know that look and/or feeling. When someone hands you something and it feels like a bodily fluid (I didn’t say what part of the body) was wiped on it. You yell your favorite acronym and then, in disgust, throw the object back at the person. That’s what Paul Millsap did when a ref gave him a ball with the illegal substance Stickum on it.

“I’ve never felt the ball like that ever,” Millsap said after the game. “It was sticky. It was like super glue or something was on there. I couldn’t get it off my hands. It was the weirdest thing ever.”

When the refs realized there was some sticky stuff on it, they did a little investigation which turned the Rockets into a bunch of elementary school kids trying to avoid getting busted by the teacher.

VIA the Atlanta Journal-Constitution’s Chris Vivlamore

As Howard was about to check back into the game, he sprayed his hands at the scorer’s table with a can covered in white tape – apparently to hide its contents. He entered the game as Paul Millsap was at the free-throw line and grabbed the ball after a made first attempt. When Millsap got the ball back it clearly had a foreign substance on it.

Official Monty McCutchen grabbed the ball and went to each bench to issue a warning, saying ‘Stickum is illegal in the NBA.’ After first going to the Hawks bench he made his way toward the Rockets bench. Rockets coach J.B. Bickerstaff slid in front of the can, still at the scorer’s table. McCutchen noted he knew what Bickerstaff was hiding.

When asked about using the product, Dwight Howard, who had 8 points and 17 boards in the loss, said he doesn’t know what the fuss is all about since he’s been using it for half a decade.

“I’ve been using it for the last five years,” Howard said to the Chron. “It hasn’t been a problem. I don’t know why people are making a big deal out of it. I do it every game. It’s not a big deal. I ain’t even tripping.”