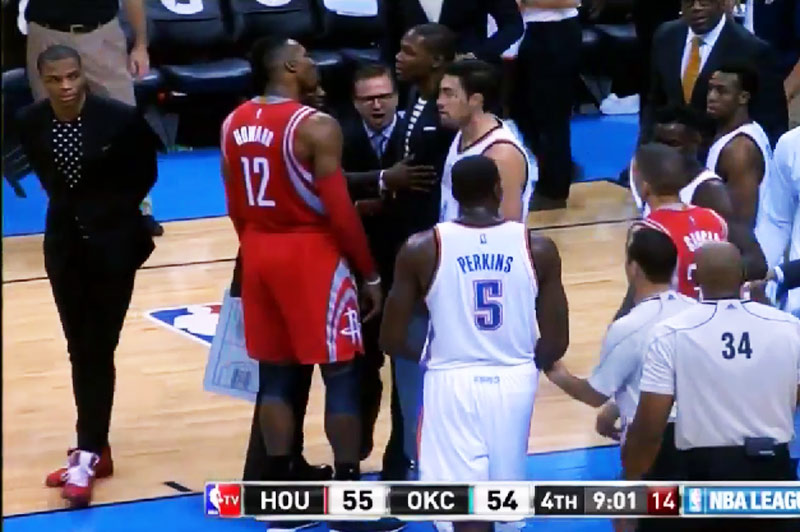 The 24 points by the Rockets in the first quarter against OKC doesn’t look like much but it was the highest scoring quarter for either team ...(Read more)

The 24 points by the Rockets in the first quarter against OKC doesn’t look like much but it was the highest scoring quarter for either team on Sunday. It was also the only quarter that either team broke the 20 point mark.

For OKC, they failed to score 15 in 2 of their quarters and the Rockets only scored 9 points in the 3rd quarter but somehow managed to win by 4.

The final score was 69-65 and the 69 was 5 points less than what the Warriors scored in the first half against the Lakers last night.

But some highlights did happen during the game including this alley-oop to Dwight Howard – who was only 4 of 14 from the floor and 4 of 13 from the line!

The most newsworthy and exciting story to come from this game, came from a player who didn’t even play in the game. During a 4th quarter altercation between the two teams, Kevin Durant supposedly had some Kobe-like comments for Dwight Howard, suggesting that KD isn’t a member of the Dwight Howard fan club.

And here’s a message from the President of the Anti-Dwight Howard Club.

My dude Kobe letting Dwight Howard know what we all think of him #soft #listencarefully cc: @kobebryant @dwighthoward