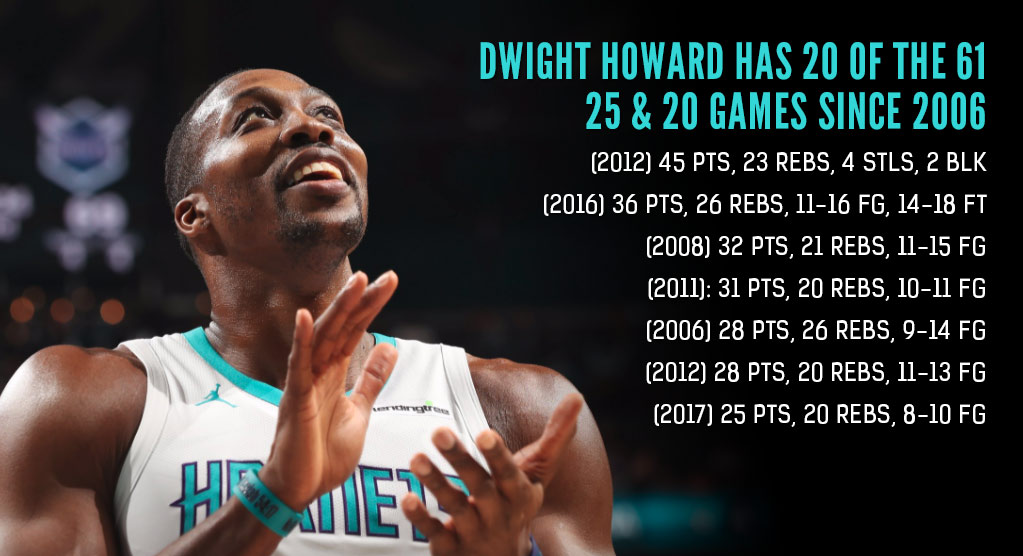 “Fuck it” That’s what 31-year old Dwight Howard had to say about the young Wolves trying the Hack-A-Shaq against him on Monday night. The 40% free ...(Read more)

That’s what 31-year old Dwight Howard had to say about the young Wolves trying the Hack-A-Shaq against him on Monday night. The 40% free throw shooter knocked down 6-of-10 in the final quarter, securing a victory for the Hornets and giving him 25 points to go with his 20 boards and 4 blocks.

Since 2006, there’s been 61 instances of a player putting up 25 points and 20 boards in a game; Howard has 20 of those instances. And his 25 and 20 against the Wolves was his first since….last year? You were probably expecting to hear it’s been a few years since the 8 x NBA All-Star put up those numbers but on January 18th of 2016, as a member of the Houston Rockets, the 3 x NBA Defensive Player of the Year put up a ridiculous 36 points and 26 boards against the Clippers. More shocking than that, he knocked down 14-of-18 free throws in that game. But that was the only 25 and 20 performance from the 5 x rebounding leader during his H-Town days.

As a member of the disaster that was the 2012 Lakers, the former NBA Dunk Champion had just one 25 and 20 game and the other 18 instances all came during his days at the Magic Kingdom, where he also made 8 All-NBA teams.

And before we get into his best 25 and 20 games, here’s Dwight and Michael Carter-Williams running sprints and taking shots 30 minutes after the victory against the Wolves.