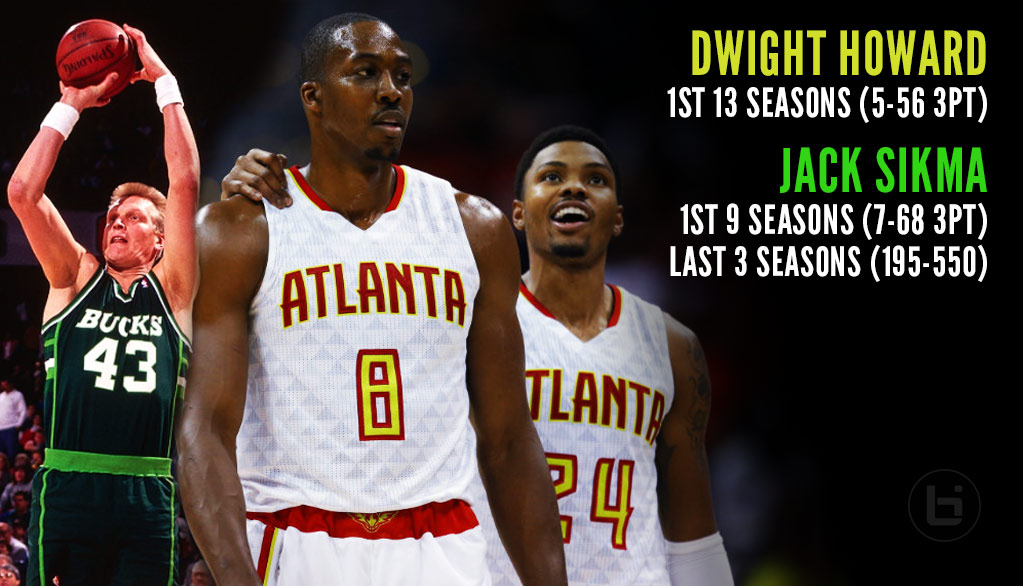 During Tuesday’s appearance on ESPN’s ‘The Jump,’ Hawks center Dwight Howard raised a few eyebrows when he said he plans on adding the three-point shot to ...(Read more)

Dwight Howard Wants To Add Threes To His Game, Can He Be The Next Jack Sikma?

During Tuesday’s appearance on ESPN’s ‘The Jump,’ Hawks center Dwight Howard raised a few eyebrows when he said he plans on adding the three-point shot to his offensive arsenal.

“I’ve been working on my 3’s, really trying to add some range to my game,” said Howard, who went 0 for 2 from three last season and is 5 for 56 over the first 13 seasons of his NBA career. “Which is going to be weird for people to see, I guess. They are used to seeing me in the paint battling. But in order for me to play longer, I have to expand my game. The game is not just back to the basket, get the ball in the post and go to work. It’s more stepping away from the basket, setting screens, popping, shooting 3’s and stuff like that. People haven’t seen me do that. It’s going to be an adjustment for me, but also the fans. I think it’s going to be fun.”

Fun for who? The Hawks shot 34% from three last season and their All-Star power forward, Paul Millsap, attempts almost four a game. I’m not sure they need their leading rebounder and second worst free throw shooter standing behind the three-point line and launching shots just so he can hope it extends his career.

Recently, we have seen players like Boogie Cousins expand their game and go from attempting less than one three a game to averaging more than one made three a game. After his trade to New Orleans, Boogie averaged 2.1 made threes on a career-high 5.6 three-point attempts. During those 17 games, he made 36 threes, which is 25 more than he made in his first five seasons in the NBA. The major difference between him and Dwight is Boogie is young and still developing his game, which already includes a mid-range jumper and a career average of 74% from the charity stripe; Dwight is going into his twilight years, never was a threat from outside the paint and only has one season shooting over 60% from the charity stripe — his rookie season.

But, you never know. We have seen other centers in the past add the 3-point shot at the end of their careers. The name that pops in my head the quickest is the underrated Jack Sikma. Some ‘Inside the NBA’ viewers might know the name from this hilarious April Fools prank on Shaq.

Like Dwight Howard, Sikma was 6’11, a great rebounder – led the league in defensive boards twice — and found early success. After averaging 14 and 11 during his rookie season, he made the first of seven All-Star appearances in his second season, which ended with a NBA championship. After nine seasons in Seattle, where he only made four three-pointers, he was traded to the Bucks and decided to expand his game by showing off his range. After making seven out of 68 threes in his first 11 seasons, he made 195 out of 550 threes in his final three. Yes, you read that correctly. Sikma went from averaging 0.2 three point attempts a game to 3.2.

Like Boogie, what separates Sikma from Dwight is his ability to shoot from outside the paint and make free throws. Not only was Sikma a great free throw shooter, he’s the only center in NBA history to lead the league (.922) in free throw percentage.

So, can Dwight be the next Jack Sikma and become a three-point threat? Anything is possible, but I think it’s as realistic as the ‘Inside the NBA’ prank that had Sikma and Dwight Howard ranked higher than Shaq on the best centers of all-time list. And, if Dwight doe fail at expanding his game, he’s probably going to continue to drop his ranking on legit best centers of all-time lists.

Michael Jordan fanatics might remember Sikma in his Bucks day as being part of his poster.