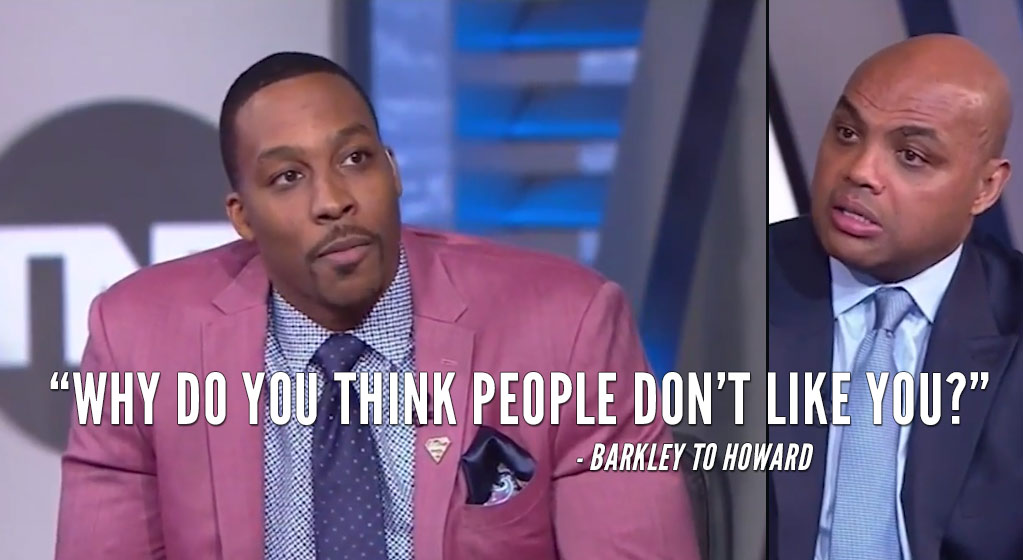 “Why do you think people don’t like you?” – Barkley to Howard Dwight Howard earned a few new fans and showed a lot of guts (when ...(Read more)

“Why do you think people don’t like you?” – Barkley to Howard

Dwight Howard earned a few new fans and showed a lot of guts (when was the last time you heard that?) on Tuesday night, by appearing on Inside The NBA, in Shaq’s seat, with a Superman pin on his pink suit, 2 weeks after getting eliminated by a Curry-less Warriors.  The (soon to be ex) Houston Rocket center kept his cool while being asked by Charles Barkley about his likability and being disinterested in games.

My drive has been there, because I will never forget the day I came in here and you [Barkley] told me I wasn’t going to be good in the NBA. And I’ll never forget the day Magic Johnson said I wasn’t going to make it in the NBA, when I was in the 10th grade. And that stuff drives me every day to be one of the greatest players to play the game. You know, so that part — to hear people say that, it pisses me off, because that’s not who I am. I’ve never been a bad person.

I’m always interested in winning. But as a big, you want to feel a part of what’s going on. And you know, if I could bring the ball up the court, shoot threes, and go between the legs, do all that stuff, that’d be great. But I have to rely on my teammates inc certain aspects to get the ball. Now, there have been times I have been upset, and I’ve taken myself out of the game in certain situations and that’s on me. And I have to grow and become a better player. So I’m always interested in the game, and I’ve had the problem with smiling too much, or I play too much on the floor, so when I’m not smiling, and all that stuff, it looks like I’m not interested in the game. So it’s like a think line, and I’m like, man — do I not smile? Or do I smile and have fun? And so that’s always been a struggle for me personally.”

Barkley then gave Howard some honest advice about taking criticism – don’t listen to what you hear on TV – and thinking about how he wants to finish his career.

The rest of the Inside the NBA intervention or therapy session was mainly Dwight saying he doesn’t know if he will opt-out (he would be stupid not to) or not. And while he was doing that, Shaq was busy making fun of Dwight on Twitter while (future teammate?) Chandler Parsons and Marcin Gortat tweeted their thoughts about the show.