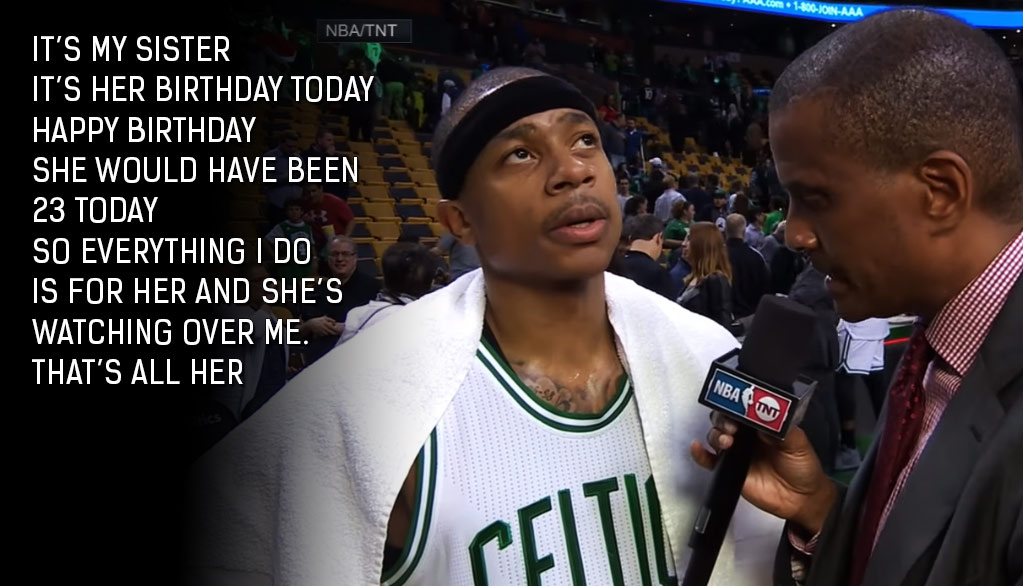 “It’s my sister. It’s her birthday today. Happy birthday, she would have been 23 today. So, everything I do is for her and she’s watching over ...(Read more)

“It’s my sister. It’s her birthday today. Happy birthday, she would have been 23 today. So, everything I do is for her and she’s watching over me. So that’s all her.”

An assist from heaven is the only type of explanation that makes sense here because Thomas’ performance in Game 2 was as glorious as any in recent memory: 53 points, including 29 in the fourth quarter and OT, which is just 1 point less than what the Wizards scored during that span. And it almost didn’t happen.

“The least I can do is go out there and play for her.” Said an emotional Thomas while mentioning his sister, Chyna, who died in a car crash a day before the playoffs started.

“I knew once game-time came, my guys would get me going, get me the energy to go out and win a game. There was no way I was sitting out.”

The 53 puts him in an elite group with Michael Jordan, Allen Iverson, Russell Westbrook, Dirk Nowitzki, Kobe Bryant and Ray Allen as the only players to score 50 or more in a playoff game in the past 20 years. The 53 was also just one point short of the Celtics franchise record of 54 set by John Havlicek.

“It’s nice to be in Celtics history with all the great players,” Thomas said. “But until you win a championship, you can’t consider yourself a great player. That’s what it’s all about.”