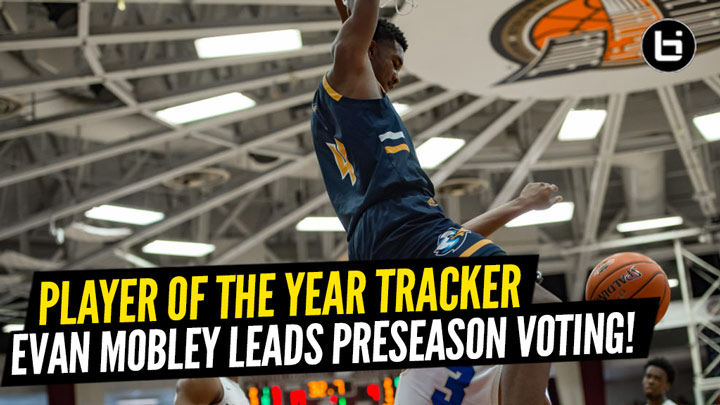 The evidence is clear when taking a look at the recruiting player rankings for the most credible and visible networks (ESPN.com, Rivals.com, 247Sports.com) and comparing them to the 2019-20 preseason ballots of the 10-man Mr. Basketball USA Tracker panel of national scouts (see footer below). As the 2019-20 season tips off around the country, the No. 1 recruit in each network’s latest 2020 rankings is the top vote-getter. Evan Mobley, the go-to player for Rancho Christian (Temecula, Calif.), the No. 21 team in the preseason FAB 50 National Team Rankings, is the leading vote-getter for the nation’s most prestigious individual honor and one of only two players among 18 candidates to appear on all ten ballots. The 7-footer headed to USC collected 95 points, appearing in first or second place on all but one ballot, to best 6-foot-6 senior point guard Cade Cunningham of FAB 50 No. 2 Montverde Academy (Montverde, Fla.) by five points (90).

The only other player to receive a preseason first-place vote was 6-foot point guard Sharife Cooper of preseason FAB 50 No. 10 McEachern (Powder Springs, Ga.), last season’s National Junior Player of the Year over Mobley after leading the Indians to a 32-0 record and No. 2 final FAB 50 ranking in 2018-19. Cooper, who appeared on five total ballots and comes in fifth-place overall to begin the season, impacts winning at the high school level as much as any player, so it will be interesting to see how his candidacy grows if McEachern continues to rack up victories.

“Cunningham and (Jalen) Johnson are the biggest challengers to Mobley,” said panel member Frank Burlison of BulisonOnBasketball.com. “Another unbeaten state title run gets Cooper in the hunt, as well.”

Jalen Green of Prolific Prep (Napa, Calif.), who came in third-place, is still 36 points behind Cunningham. The explosive shooting guard appeared on six ballots, including four where he came in No. 3 on each.

“Evan Mobley and Cade Cunningham…take your pic…Cunningham deserves it now based on what he did this summer, but in terms of ability and long-term potential, Mobley is that guy,” said panel member Clark Francis of the Hoop Scoop. “There is no right or wrong answer on that.

“Jalen Green deserves to be No. 3. He took it to another level at Peach Jam and Vegas, so he deserves some credit. And those are the three, but Green is not better than Cunningham and Mobley at this point. The other guys I voted for are not in the class of the top three. I’m surprised Terrence Clark is No. 4 (in the balloting). I think from a rankings standpoint, he would have been better to stay in the junior class. Jonathan Kuminga is a feast or famine guy, too. Cunningham gets it done every time.”

In last year’s preseason, six players received first-place votes, so going into 2019-20 it’s evident the other 16 top national player of the year candidates have their work cut out for them to be mentioned in the same breath as the nation’s top two 2020 prospects. A majority of the top candidates over the years played for winning programs and had the opportunity to perform against other quality teams and players, and this season is no different. Mobley and Cunningham will also play in high-profile games and have an opportunity to show the country why they are so highly-regarded.

If Mobley leads his team to a CIF Southern Section and/or CIF state open championship, or if Cunningham leads Montverde Academy back to the top of the FAB 50 and a GEICO Nationals championship, will any other candidate stand a chance?